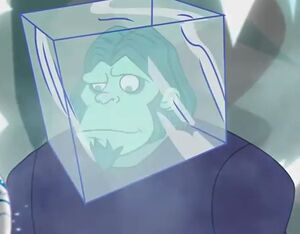 Ricky[1] is a 2011-introduced and cartoon-only character. He is a blue humanoid gorilla whose feet, hands and head are encased in blocks of ice and a student at Monster High.

Ricky appears to be a good natured guy who doesn't mind an occasional challenge. He might favour hanging out in cold places.

He is a blue humanoid gorilla whose feet, hands and head are encased in blocks of ice. He has long hair and a goatee. He has on a dark blue shirt, and grey cargo pants.

Ricky started out as a backgrounder when he debuted mid-Volume 2. In this capacity, he appears in "Fear Pressure", "Daydream of the Dead", "Nefera Again", "Hyde Your Heart", "Fright On!", "Why Do Ghouls Fall in Love?", "Creepfast Club", and "I Know What You Did Last Fright".

In "No Place Like Nome", Ricky hung out hidden in the school's freezer. Abbey Bominable knew this and went to him to challenge him for a game of armwrestling. Ricky accepted. He was one of the victims of Hoodude in "Undo the Voodoo" seen in the classroom, some of the ice on his hands and feet are melted slightly and his clothes were partially ripped.

Retrieved from "https://monsterhigh.fandom.com/wiki/Ricky?oldid=344692"
Community content is available under CC-BY-SA unless otherwise noted.