Ramses de Nile is a 2010-introduced and fiction-only character. He is a mummy of royal standing. Once the pharaoh of Egypt, following his death he founded a new empire, reigning mostly over what appear to be ushabtis. Though married, he became separated from his wife prior to his mummification. After ages of looking for her, Dedyet was found and rescued by Robecca. Ramses' focus is on raising his two daughters, Nefera and Cleo. While he loves them dearly and spares neither effort nor expenses on getting the best for them, his old-fashioned standards and strict expectations mean his intentions do not always produce good results, which is especially true for Nefera. Control is important to Ramses and he is slow in understanding that if he wants his daughters to be leaders too, he will have to let them make their own decisions even if those are opposite to his wishes.

He is voiced by Audu Paden in English.

Ramses was once a pharaoh of Egypt some 5,000 years ago. He had a wife and two daughters and supposedly dwelled in luxury with his extended family as well. One night, Ramses' brother (or one of them) rallied a coup de taut against him, supposedly having even the royal advisors as allies. Ramses was separated from his wife when the people broke through the palace walls and was forced to flee underground with his two daughters, Nefera and Cleo. Wrapped in magical bandages to wait out the coup, Ramses was assured that his wife was in her own chamber being preserved. However, possibly due to Ramses being an unpopular king, no one came to the family's rescue.

They remained asleep in the wrappings for 1,300 years before waking up in the darkness.

Ramses de Nile is a very strict father. He is the chairman of the Monster High construction committee and oversees all new building plans. He seems to be aloof and uninterested in the happenings of Monster High, but coincidentally much of the business he has there seems to correspond with events where Cleo is involved. Cleo's student file He also has a disliking for Deuce Gorgon and thinks he is a slacker who is not worthy to be his youngest daughter's boyfriend. Ghouls Rule Table for None In the books he is an antiques dealer.

Unlike his daughters, Ramses is completely covered with wrappings. Only his bony fingers, his mouth and his blue eyes are shown. After Ghouls Rule, Ramses underwent a change of appearance. In Boo York, Boo York he is wearing a brown suit along with dark shoes and a headdress. Plus, a ring, a fake beard, a watch and a collar. Also, a cane, although it is unknown if it is just an accessoire or if he actually needs it. Ramses is tall and lean and has several gold teeth.

Various family members of Cleo and Nefera are mentioned throughout the fiction, but never so that their relation to Ramses is defined as being by blood or by marriage. There is an uncle of the girls who dethroned Ramses and likely is long dead, an aunt by the name of Nefertiti who may or may not be long dead, The Ghoul Next Door an aunt named Neferia who is still around, Who's That Ghoulfriend? an uncle named Tut who owns a yacht, Facebook and a grandmother who occasionally visits. Inscare-itance

Though not family, Jinafire Long lives with the De Niles during her stay in the Boonighted States of Scaremerica, making her part of the household. Jinafire Long's New Scaremester agenda

As a man deeply opposed to being mistaken for a commoner and prideful of his background, Ramses does not have a lot of actual friends. Arrogant but well-mannered, generous, and in the possession of millennia of political experience, Ramses is, however, generally well-liked and respected around New Salem and within his circles of business.

Ramses is married to his wife, Dedyet de Nile. When Ramses' brother ursuped the throne and entombed Ramses along with his daughters, the queen was absent. However, she returned once in Robecca Steam's SDCCI diary and once in the book Cleo de Nile and the Creeperific Mummy Makeover.

Despite the September Semi fiasco of yesterday that forced all the RADs to precautionarily keep their children inside, Cleo was able to dodge the bullet because her father was out of town. He is due to return that night, though, and Cleo and her servants, Hasina and Beb, are working hard to prepare a suitable welcome. Ramses de Nile and his assistant Manu arrive a little earlier than planned, but most of the preparations are already done. Cleo goes to greet her father and is surprised when he greets her back with a warmth that is unusual for him. Despite being out of town, Ramses knows everything that happened yesterday, except for the involvement of RADs other than Frankie Stein. His concern for his daughter's safety is what brought on his unusual demeanor. Cleo becomes secretly annoyed that her father somehow always manages to know what's happening, even when he's not there. She accompanies him to the throne room and Ramses talks about the excavation work in his sister's, Nefertiti's, tomb and the impressive jewels found there. Manu opens the briefcase to show Cleo the finds, but to Ramses' annoyance, Cleo is only interested in one item: a Vogue business card from Anna Wintour. Cleo insists he tells the story behind obtaining it, and Ramses confides he met the normie on the plane from Cairo and that she was looking to do a "Cairo couture" fashion shoot in the Oregon sand dunes, featuring Nerfertiti's jewels. Ramses makes no secret of his disinterest, but Cleo is ecstatic. She insists he contact Anna Wintour to be a model for the shoot and wear her aunt's jewelry, promising in return that she'll supervise the shoot to make sure their interests won't be damaged. Ramses eventually gives in and is profusely thanked for it. Next, Cleo tries to text her friends to meet with them and speak about the shoot. The Ghoul Next Door

Fearing that Cleo will be the next target of a human abduction, Ramses arranges with Tab on advice from Sylphia Flapper that she and Toralei will go everywhere together so that they'll have the benefit of strength of numbers. Who's That Ghoulfriend?

Ramses gets a call from Valentine, though he thinks it is Deuce, and is very upset by whatever was said before he slams the phone. Cleo visits her father asking in an austerity manner for a raise on her allowance. Ramses is willing, wanting his daughter not to appear "common", until Nefera informs him that Cleo wants money to go on a date with Deuce. Ramses reminds Cleo that he has never approved Deuce, who he considers too common for his daughter. Cleo defends her boyfriend and states that she'd be with him without her father's consent. Ramses declares he'll never approve of the choice and cuts Cleo's allowance entirely. As Cleo is storming out of the room, declaring that Deuce will make her happy regardless, Ramses tells her to improve Deuce's phone manners, much to her disbelief. Table for None

Ramses takes a more active role in the movie as a second antagonist with Nefera.

After looking out using his telescope Ramses declares, "After 1300 years... it is time!" Referring to an ancient prophecy with the Comet Ceremony. He orders his daughter, Nefera to pack her bags and summon her sister Cleo, much to Nefera's annoyance. He allows Cleo to take all of her ghoulfriends with her to Boo York City for the Ceremony, though not initially telling either of his children his plans.

Ramses becomes agitated when Cleo and Nefera are late for their meeting with the Ptolemy family, to the point he says he would curse them if they were not his own daughters. This anger is quickly dissolved as he begins groveling Lux Ptolemy and her son, Seth.

Later that night, Ramses picks up Nefera from her shopping to ask her what she knows about the Comet Crystal, the most important Egyptian artifact. He reveals his plan to Nefera to have her promised (engaged) to Set Ptolemy, making their two families join into a super dynasty, regaining what Ramses deems as their lost power! Nefera initially refuses, proclaiming Set to be weird! Ramses intrigues Nefera with the idea of wealth and power, but he quickly shifts ideas when she suggest Cleo "a real ghoul of the people" marry Set instead with the two of them ruling through her! Ramses agrees to this until he remembers Cleo may not go along with it as she already is in love with Deuce. Nefera promises to get Deuce out of the way, to which Ramses evilly grins.

For the rest of the story, he either allows Nefera's plans to progress or (uncertainly) assures Lux Ptolemy that the ceremony will be complete. Yet when Deuce comes back for Cleo, despite Ramses voicing his displeasure, he does nothing to stop them from getting back together. Boo York, Boo York (TV special) 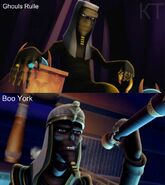 Add a photo to this gallery
Retrieved from "https://monsterhigh.fandom.com/wiki/Ramses_de_Nile?oldid=353042"
Community content is available under CC-BY-SA unless otherwise noted.