All the creatures of the sea are my friends, and I would never consider any of them "pets".

Posea Reef is the daughter of Poseidon, and debuted in the television special, Great Scarrier Reef. She lives in the Great Scarrier Reef and is the local gardener goddess and the guardian of the creatures that live within the reefs.

In the English cartoon she is voiced by Paula Rhodes.

Posea is a sea nymph, daughter of the God of the Seas, Poseidon, himself. Little is known about her origins, past and background.

However, her father chose her as the official Gardener Goddess of the Reefs, due to her gift of botany, keeping her in charge of a magical garden under the sea, which flowers, plants and corals represent each and every creature original from the coasts of Australia, with feelings and emotions that channel to their appearance depending on the emotion or state the creature represented by it is in. Posea's duty is too keep these plants safe and sound, and, when signs of problems are shown, she is to go to the rescue and give the care needed, is it harmed animals or troubled souls.

Posea is incredibly savvy about botany. A passion she has had since she was a child, she simply connects to plants in such a way that she is incredibly devoted to them, as well as to any other creature of the sea. If a living being is in danger, she is sure to leave whatever she is doing just to offer her hand, selflessly, and simply cannot stand anything that comes in the way of saving a friend, which is why she is passionate about the environment and completely despises the way her home is taken for granted by so many monsters and humans out there.

Cheerful and laid-back, Posea is a peaceful girl who is incredibly intelligent and smart, in fact, it seems like she always has answers to anything. Her goddess heritage gives her all-knowing powers, that she uses wisely, but sometimes fails to channel this knowledge, after all, she is just a "goddess-in-training". This causes a bit of grief, as information tends to get tangled in her head and makes her mix-up facts, or simply forget them. However that doesn't stop her from bring very analytical. She also tries very hard to fulfill her goddess duty, down to her flamboyant attempts at being regal, which make her act overly dramatic to sound epic, omnivorous and intimidating, usually just sounding silly.

Posea has foam blue skin and webbed hands, and sports plum hair with turquoise greenish streaks, that bring out her greenish grey eyes, just above her lilac freckles. Her face also features fish gills under her eyes and in her forehead, as well as coral-like ears. Additionally, her torso and limbs seem to have a texture that consists of pearls, while her lower half is made of algae, in the form of algae-like tentacles. She loves to decorate her squid like tail with corals and other algae.

Posea is one of the daughters of Poseidon, the Greek God of the Seas. She and her father are very close, and her father trusts her with the garden, evidencing this.

Posea's best friends are a group of playful Sea-Mares, who despite being loyal to her, aren't afraid to play little tricks, interfering with her efforts of being professional.

Posea is also strangely touchy about Kala Mer'ri. One of the plants that sway in Posea's garden represents her, described as a "plant with lots of purples and golds and reds -vibrant, bold colors.", "healthy, and often dances merrily in the waves.", "strong" and "aggressive", yet deep down "kinda sad" and "yearning". This plant is very special to Posea, who deeply worries for her. Despite always getting the cold shoulder from her, she can sense the sorrow within her and, despite not respecting her diva ways, she seeks to understand it and help, though she does recognize the fake game Kala plays with her, of trying to befriend for her status.

Peri and Pearl Serpentine are also plants in her garden, but she doesn't give them much attention, despite being entertained by their ways. However she is confused to why they are so devoted to Kala and never speak up about her bossiness. 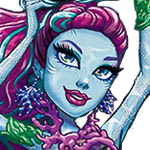 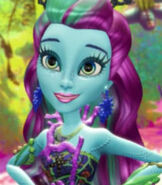 Add a photo to this gallery
Retrieved from "https://monsterhigh.fandom.com/wiki/Posea_Reef?oldid=345817"
Community content is available under CC-BY-SA unless otherwise noted.