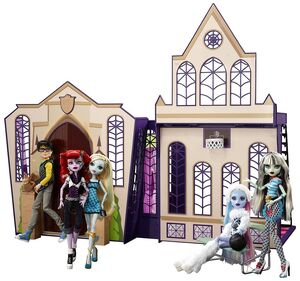 Draculaura's Powder Room includes a vanity and a bathtub, but unlike Cleo's vanity, her mirror is fake and instead includes a picture of her clothes since Draculaura can't see her reflection. It also comes with a doll-sized toothbrush, tube of toothpaste, makeup, towel, bottle of bubblebath and tray to hold the items on the side of the bathtub.

The set was later re-released for Toys"R"Us with a Draculaura doll and Count Fabulous figurine.

The set comes with a scooter for Ghoulia, along with a doll-sized helmet, bag, and soda, and also a helmet for Sir Hoots-A-Lot as well.

The set was later re-released for Toys"R"Us with a Ghoulia doll and Sir Hoots A Lot figurine.

Parts of the school represented in the set are the front doors, a classroom, the creepateria with a number of lockers, and a second floor with sound equipment. The classroom includes 2 desks, several trophies, 2 doll-sized diaries and pens, a cart, a frog and a portfolio. The creepateria is located right next to the classroom, and inbetween is a hallway with openable lockers. The creepateria includes a table, a Skullete discoball and several bowls of food and drinks. Above the creepateria is a sound booth that includes speakers for Operetta and Holt Hyde. A laptop is also included. On the outside is a casketball court that features a doll-sized ball and net. You can try to toss the ball in the net by your doll's hands or grab the ball and pop it in.

Big pieces: The Roadster is a black car with pink accents, heart imagery and batwing/cobweb decoration. It has pink seats, black seat belts, a pink steering wheel, a pink GPS, a black dashboard, and pink windscreen. Small pink tailfins are located on the back, and on the front are pink heart-shaped headlights and a pink heart-shaped grille. On top is a pink bat-shaped hood ornament, behind which a pink line stretches over the hood up into a heart just in front of the windscreen.
Small pieces: There are no small accessories included with the Roadster.
Notes: The Roadster comes with a Draculaura doll. The Roadster was re-released from 2011.

Big pieces: The bed’s frame made from a transparent ice-like materiel. A denim colour is visibly shown through the ice. At the end of the bed is a frame-like structure with denim blue bricks. At one end of the bed is a TV made of ice-like materiel. The bed comes with a white blanket with blue, pink and black accents on it.
Small pieces: The play set comes with a teal alarm clock made of ice, a book that possibly belongs to Abbey, a magenta ice lamp and a purple cup with vanilla frosting in it.
Notes: The bed does does not come with a doll, but the best recommended doll would probably be dead tired Abbey Bominable.