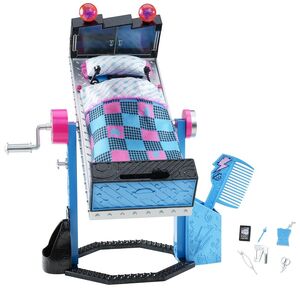 The first Monster High dolls were released in July of 2010 and the first playsets joined them five months later in December. These were two beds for Frankie Stein and Draculaura, which also happened to be the final doll items of 2010.

Big pieces: The Jewelry Box Coffin is a black coffin with pink stylized heart, swirl, and skullette decorations and pink handles. Inside are a pink bow-shaped pillow with white lace, a blanket partially white with pink hearts and partially pink with black diagonal lines, and a white curtain with pink hearts. There's a white heart-shaped tray that can be slid onto the right side of the coffin and the inside of the lid features a pop-down TV set which displays the weather channel. On one side of the coffin's lid is a holder from which Count Fabulous can hang. The coffin's lid itself can open to reveal space to store jewels as well as the accesories that come with the playset.
Small pieces: The Jewelry Box Coffin comes with a lot of doll-sized accessories: a blue pitcher with pink drink, a pink cup, a pink saucer, a journal, and a white pen. The bed also comes with a real-life sized pink bat ring.
Notes: The Jewelry Box Coffin does not come with a doll, but Dead Tired Draculaura, released in Early June, 2011, is the suggested match. Draculaura's second Dead Tired doll, released in Mid June, 2012, also qualifies as a match. The Jewelry Box Coffin was re-released in 2013 with the first Dead Tired doll of Draculaura included.

Big pieces: The Mirror Bed is a grey, pink and blue colored laboratory table decorated with a pillow, beneath which rests a set of bolt clamps to attach to Frankie's neck bolts. The blanket that comes with the set is checkered with lightning bolt and skullette decoration as well as a white top with blue stitch decoration. The bed can be moved between horizontal and vertical positions by the crank on the left. The headboard functions as a cabinet and the footboard features a pop-up TV set which displays the sewing channel. On the right side of the bed's legs is a holder, on the other side a place to sleep for Watzit. At the underside of the bed is a large mirror so that the Mirror Bed can also function as a real-life desk mirror.
Small pieces: The Mirror Bed comes with a lot of doll-sized accessories: a silver stapler, silver needle and thread, silver scissors, a blue juice drink with silver straw, a diary, and a blue pen. The bed also comes with a real-life sized blue comb.
Notes: The Mirror Bed does not come with a doll, but Dead Tired Frankie Stein, released in Early June, 2011, is the suggested match.

Retrieved from "https://monsterhigh.fandom.com/wiki/Playsets/2010?oldid=338121"
Community content is available under CC-BY-SA unless otherwise noted.