Plant monsters are types of monsters that are made of plants. Various trees, shrubs, herbs, grains, flowers, and fruit appear in myths and legends as general symbols of rebirth, decay, and immortality. Some plants have acquired much more specific meaning in folklore. Plant monsters also show up in fantasy games, usually as generic first-level enemies. Plant like creatures are beasts that basically are plant like in origin but are not like normal plants, they often have some basic intelligence, and can be carnivorous.

There are a few well known plant monsters such as Venus McFlytrap, Crabgrass, Amanita Nightshade and Treesa Thornwillow who is also a nymph. Plant monsters can be very different from each other taking on traits from different kinds of plants. Like Venus who's based off of a venus fly trap, while Amanita is based off of a corpse flower.

Plant monsters usually have green skin and wear organic clothing. Some can also have brown skin looking similar to a tree trunk. Some plant monsters have more plant like traits rather than human like traits. Like Crabgrass who only has a lower body of vines rather then having legs. In a earlier webisode a plant monster named Thornton makes a appearance in Cleo's locker everyone thinking he's a normal rose, till he reveals himself to be a new student. Thornton has small fanged teeth, a risen nose, and is very small. He uses plant leaves as his hands and feet, while still being attached to a flowerpot.

Treesa and her sister also have a tree like appearance, having tree bark like skin, and branches on their arms. 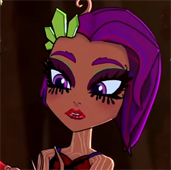 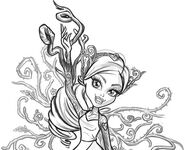 Thornton
Add a photo to this gallery

Retrieved from "https://monsterhigh.fandom.com/wiki/Plant_monsters?oldid=346265"
Community content is available under CC-BY-SA unless otherwise noted.