Deuce Gorgon. He likes to cook which is totally creeperific cause I get to sample everything but dude doesn't use nearly enough cheese.

Hanging with Deuce Gorgon at the skate park or just chillin' at home.

Having to stay at home while Deuce Gorgon goes to school. He already knows how to sit and fetch me cheese. What else does he need to learn?

Perseus is a grey, pot-bellied rat with an orange mohawk and stomach, an earring in one of his ears, brown eyes, and two tails.

"...Named for an ancient Greek warrior mom knew. She doesn't think it's funny." 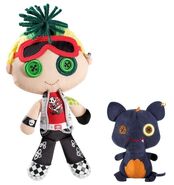