The heads of our family won't let us get any pets until we can agree on what kind.

Peri Serpentine is a 2015-introduced character and the daughter of the Hydra who debuted in the movie, Great Scarrier Reef. She shares her body with her conjoined twin sister Pearl Serpentine.

In English, she is voiced by Rachel Staman.

Peri is a good soul. She tends to look at the positive part in every issue, and deals better with chaos. She may seem pretty air-headed at times, but its really just because she wants to live life freely, which at times is hard, due to her sister, and the restrictions sharing a body brings. There is one thing however, the two are always excited about: gemstones and collecting them. So much that their goal is to be jewel makers.

In comparison to her sister she is both the nicest, the girliest and, strangely, the most mature one, even if her behaviour doesn't express that at all. She will get over issues more easily than her sister and definitely will get less personal about things her sister usually makes a fuss about.

However, her mild scatterbrain ways make her get very carried away with things she's doing, especially if it pleasures her, almost acting selfishly while forgetting that she does share a body with another creature with other likes, dislikes and restrictions.

Peri is a snake creature, that is: half woman half serpent. Her upper body is silverish white grey, and has two necks, one that holds her head and identity and another that holds her sister's head. She has metallic peri-blue hair with some white streaks and blue eyes with deep blue irises. She has fins on her lower arms and a dark blue tail, with purple fins at each side of her waist, scales and a teal fin at the end. She also has scales all over her body, like a snake.

Peri has a smooth, calm voice, in contrast to Pearl’s more raspy voice.

Peri is the daughter of the Hydra, and, because of this, has at least 8 parents, or heads, to please, obey and love. She's the twin of Pearl Serpentine.

Her best friend is her sister. They literally spend every second of the day with each other, which has lead to a complicated relationship between the two. They most certainly love each other and enjoy each other's company, however, so much time together can make them annoyed at times, and Pearl's tough personality doesn't help, seeing how she gets so easily irritated, therefore they usually head-butt and disagree, breaking into arguments when less needed.

She also considers Kala Mer'ri a good friend, though she probably wouldn't hang out with her if it wasn't for her sister's weird commitment to her. She finds her bossy personality and her constant bickering quite annoying, though she does feel special that such a picky monster wants to be her friend. The two can have fun together sometimes, though. 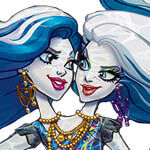 Add a photo to this gallery
Retrieved from "https://monsterhigh.fandom.com/wiki/Peri_Serpentine?oldid=353050"
Community content is available under CC-BY-SA unless otherwise noted.