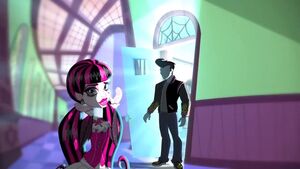 The Perfect Guy is a 2010-introduced and cartoon-only character. He is a blue, faceless creature whose species isn't given and a student at Monster High.

The horrorscope described the Perfect Guy as "solid and dependable", though this may have been an allusion to him being turned into stone rather than what he himself is like.

The Perfect Guy is a handsome, tall, with pale blue skin, small pointy ears, and is a muscular student who wears a leather jacket with a flame pattern, and the ends of the sleeves, and has on grey jeans. He has black hair that is styled like Elvis Presley.

According to Draculaura's horoscope, she will meet the perfect guy, "handsome, chiseled, solid and dependable", as soon as her eyes leave the page. She looks up and sees the Perfect Guy, but looks away to make sure her appearance is good. When she turns back, the Perfect Guy is gone. Draculaura's friends help her reach him before the school's out, at which point the horoscope won't count anymore, and end up petrifying him with Deuce's help. Draculaura takes him on a lunch date all the same. Horrorscope

Retrieved from "https://monsterhigh.fandom.com/wiki/Perfect_Guy?oldid=349568"
Community content is available under CC-BY-SA unless otherwise noted.