The heads of our family won't let us get any pets until we can agree on what kind.

Pearl Serpentine is a 2015-introduced character and the daughter of The Hydra who debuted in the movie, Great Scarrier Reef. She shares her body with Peri Serpentine.

In English, she is voiced by Cherami Leigh.

Pearl can be a little hard to deal with at first, but she is definitely one of a kind. Unlike her sister, Pearl is prone to getting angry easily and will take hot headed measures, even if after she regrets it. Sassy, with a little mean streak, Pearl is an independent girl who goes by her own rules only and is full of sttityde. She has little patience for mistakes or betrayals, and can get pretty cold if someone does something she dislikes. Pearl’s voice is much raspier than her sister’s.

Pearl is half serpent, with tail with several fins, and her body has two necks, one that holds her head and identity and the the other holds her sister's head. Her hair is pearl white with some metallic blue streaks of hair flowing from the back of her head. She has blue eyes with deep blue irises, as well as white skin and scales. She has fins in her lower arms and a dark blue tail, with purple fins at each side of her waist, scales and a teal fin at the end.

Pearl is the daughter of The Hydra. Her family is incredibly unique, with a strange system of parenting, as, being the daughter of the Hydra, means there are several heads, each with different personalities, rules and each of them counts just as much as a parent as the other does. There are at least 4 heads.

Peri Serpentine is Pearl's sister and inhabits the same body, though with a different head. Her best friend is her sister but they literally spend every second of the day with each other, which has lead to a complicated relationship between the two. They most certainly love each other and enjoy each other's company, however, so much time together can make them annoyed at times, and Peri's happy-go-lucky personality doesn't help, seeing how it so easily irritates Pearl, therefore they usually head-butt and disagree, breaking into arguments when less needed.

Pearl's relationship with Kala Mer'ri is nothing short of strange, as even though the latter can be pretty inconsiderate towards her, she has a infatuation for her, which has yet to be explained, though it could be because of her popularity and skills at dancing. Anything Kala says, Pearl will take and will do anything requested by her, which is what really is strange about their relationship, as Pearl simply will not do anything for anyone, her exception being Kala. 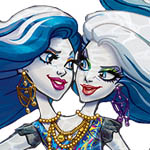 Add a photo to this gallery
Retrieved from "https://monsterhigh.fandom.com/wiki/Pearl_Serpentine?oldid=346719"
Community content is available under CC-BY-SA unless otherwise noted.