Draculaura and Frankie both have birthdays. When they try to plan parties for each other, they end up getting a frightfully cool surprise!

Frankie approaches Clawdeen to talk about party planning, but Clawdeen says she already has plans. Elsewhere, Draculaura tries to give an invitation to Lagoona, but she says she has swim practice. Everyone else either girl asks to come to the party also has a reason they cannot come. Eventually, the girls make it to the creepateria doors at the same time, bummed out that all their invitations have been turned down. Distracted by the situation, the girls bump into each other and use the opportunity to wish each other a happy birthday. They both explain that they tried to throw parties for the other, but no one could come, and they decide that the next best course of action is to just throw a party for the two of them.

When they open the doors to the creepateria, though, they are met with a loud "Happy Birthday!" from all their friends, revealing that they had been working on a surprise double birthday party all this time. Elated, Frankie and Draculaura share a group hug with Lagoona, Clawdeen, and Deuce while Ghoulia snaps photos. The party is a huge success. 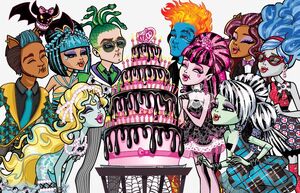 Retrieved from "https://monsterhigh.fandom.com/wiki/Party_Planners?oldid=348050"
Community content is available under CC-BY-SA unless otherwise noted.