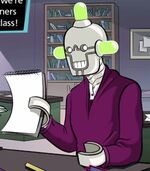 Otto is made of grey metal, he has solid white eyes, and has no fingers. There are three large green lights sticking from his head. He also wears a long sleeve magenta shirt.

Retrieved from "https://monsterhigh.fandom.com/wiki/Otto_Maton?oldid=345939"
Community content is available under CC-BY-SA unless otherwise noted.