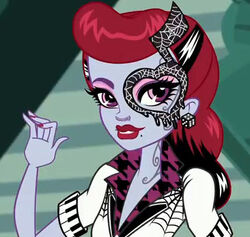 Operetta debuted in the cartoon series in the Volume 2 webisode "Hiss-teria", which premiered on September 29, 2011. She is voiced by Gigi Sarroino and Cindy Robinson in the English version of the cartoon.

In "Fright On!", Though Clawd broke up with Draculaura, the rumor that the werewolves have harmed her infuriates him and he demands Romulus to tell him what happened. Romulus denies involvement and points out that, if anything, Clawd should be worried about what has happened to his little sister. Clawdeen joins him then, revealing that she went to talk with the vampires and that they swear they haven't harmed Howleen. With Frankie also missing and Bloodgood's statue gone, Clawdeen figures that Frankie was right and that Van Hellscream is behind all the disappearances. She and Clawd decide to first find their friends and family using their superior olfactory abilities. This leads them to the catacombs, where they get Operetta to be their guide. The captives have freed themselves meanwhile and are making their way outside when they are attacked by scargoyles. With combined strength, they manage to hold the creatures off just until Clawd, Clawdeen, and Operetta find them.

Why Do Ghouls Fall in Love?

In "Escape From Skull Shores", Operetta, Spectra, Clawd, and Deuce all received invites to the Great Scarrier Reef, but aren't able to come along because they or their families have other plans already.

In "Friday Night Frights", Apparently, part of the ghouls' training is to skate throughout the school and despite they're getting better, Frankie and Draculaura are still lacking in the art of it, still quite clumsy with it. This is noticed by many students, but Operetta mainly for some reason, who watches their every move and eventually daringly rescues them from crashing and getting injured. Upon this, Frankie offers the music diva if she wants to join the SKRM team, although Operetta refuses, claiming that she's not the type to join any kind of organized team sports, and she leaves the ghouls, not bothering to say anymore.

Operetta appreciates the rebellious attitude and joins the team, taking Cleo's spot. She helps teach the ghouls the rules, but her attitude makes her a poor coach. Luckily, Clawd returns as the team's new coach. After a strict training regimen, the ghouls are ready for their sophomore debut against Vampire Academy. The ghouls play well but are best at the last minute by rough tactics of the vampires. Serendipitous, Operetta was knocked into a pile of tires that contained glowing artifacts. Ghoulia explains that is the last piece she needed to rebuild Robecca Steam! Robecca is glad to hear that over 100 years SKRM has progressed enough to allow female players. The ghouls regretfully explain that is not the case, and they are the only all-ghoul team and are faced with prejudice. Robecca offers her assistance as a player, but she is still missing her balance modulator. Her one piece of advice is that "If you want to win...you need to be true to yourselves...If you want to beat the boys you need to play like girls." Thus inspiring their new fashionable outfits. The gargoyles begin to mock the new outfits, but the masked player on the team reveals that she is, in fact, a ghoul. Rochelle Goyle announces that she transferred from Granite City to Monster High. She takes Frankie's spot on the team. The ghouls enter a round robin tournament and eventually make their way up the leader board until they qualify for the final match between Granite City. Instilling the school with pride, the ghouls are now wildly popular and even gained the respect of Manny and Heath, who even volunteer to be the team's new cheerleaders. During practice, Clawd fears that his intense training won’t be enough to defeat Granite City. Robecca tells Clawd every team has a weakness; he just has to look for it. Clawd notices that Toralei is spying on the team's practice, so hints that they need to play up the discord. The next day Toralei tries to conspire with Operetta against the team.

In "Ghouls Rule", The trio go see Operetta to ask if she, the resident catacombs expert, knows anything about this place, which Operetta doesn't but is willing to help look for. With the aid of the map, the four actually find the place and learn the true story of Halloween from the mechanical tour guide. Originally, Halloween was a way for humans and monsters to celebrate their friendship.

The humans accept the confession and invitation, but then the Sheriff and his officers finally arrive, intending to arrest Holt, Frankie, and all monsters present. The New Salem students, however, make a stand against the Sheriff and challenge him to arrest them as well if they want to get to the Monster High students. The Sheriff, wanting to avoid the fallout if he arrests the New Salem students as well, saves face by claiming it's past midnight and that means he is off duty anyway, before sneaking off to the snacks. With all conflict thus ended and subdued, the party commences.

In "Scaris: City of Frights",

In "13 Wishes", As Howleen Wolf gains more popularity Operetta invites her to her party.

Later as Whisp and Howleen take over monster high Operetta is one of the students to scold Howleen and the shadow copies, but she is simply taken away. She makes a cameo near the end of the movie at the party.

In "Frights, Camera, Action!", As the female students at monster high argue about who's cuter Alucard or Edweird, Operetta lets out a glass breaking scream to stop the arguing for a bit.

But later in the movie the Vampire Majesty movies have caused a conflict among the female students at Monster High about which of the male love interests is hotter: Alucard or Edweird, with Toralei and Howleen leading the opposing sides of the argument. Frankie, Abbey, Lagoona, and even Clawd, Gil, and Deuce stay out of it, but become worried as the argument escalates as more students side with Toralei or Howleen. The situation is getting vicious, so Operetta organizes a Cute Court for the students to decide on who is the bigger hunk. Twyla, who is explicitly not interested in either, is chosen as judge, Manny gets to be the bailiff, and Ghoulia is the court clerk. After a long debate, Twyla asks Ghoulia for a scientific advice. It is then that Ghoulia makes a huge discovery: Alucard and Edweird are played by the very same actor! Twyla dismisses the case and the students end the fight. However, Ghoulia is not done yet comparing people, now that she has solved one thing this way. Taking the photo of Elissabat that Draculaura sent her and a poster depicting Veronica Von Vamp, Ghoulia realizes that the two girls are the same person.

Operetta is last seen at the end hushing everyone to be quiet in the theatre as the movie is going to start.

In "Welcome to Hauntlywood", The entirety of Monster High has been invited to the premiere of Veronica Von Vamp's latest movie. Spectra reports on the event, delighted by all that is going on but eager for an actual scoop. She spots her fellow student Operetta talking with Honey Swamp, who did camera work for the movie. Spectra decides to eavesdrop in hopes of getting information about the movie's content.

To her horror, Operetta and Honey describe a movie that sounds everything but entertaining. They talk about how “she”, whom Spectra assumes to be Veronica, just sleeps and watches the grass grow. Having heard enough, Spectra rushes to them and calls for the premiere party to be ended if there's only such a boring movie to celebrate.

Amused, Operetta and Honey explain they weren't talking about the movie, but about their grandmothers, whom they've discovered are best friends. Spectra is relieved she assumed wrongly for the sake of the premiere party, but is sad that this means she has no scoop. Operetta offers her another scoop to make up for it: her grandmother's secret ghoulash recipe.

Operetta is one of the many fans of Clawdia Wolf's stories. Tales from the Script

In "Haunted", She is seen with Johnny Spirit, and Scarah Screams as Spectra asks them if they know ant gossip. Thou Operetta's info isn't that helpful to Spectra.

She is later seen as detention chains wrap around her and start dragging her away. Johnny and Scarah try to save her only to be taken as well. They are brought to Haunted High, but are later free of the chains are they escape with the rest of the ghosts back to monster high.

In "Boo York, Boo York", Meanwhile Ramses de Nile sees the crystal comet arriving and he and Nefera prepare to head to Boo York. He also informs Cleo and allows her to take a friend or two with her. However, she invites Deuce (as well as giving him a King Tut-like chin piece and gold glasses), Frankie, Clawdeen, Draculaura, Operetta and Catty.

The crew head to Boo York where they shop for new clothes and wear them out. The ghouls are about to take the subway to catch up with Cleo, when they meet a rapper named Pharaoh, who takes an immediate liking to Catty. The duo then make an escape from the crowd of Catty's fans. Deuce approaches Cleo and painstakingly breaks up with her.

The ghouls, including Catty later dress up for the crystal comet. Nefera convinces Cleo that Deuce isn't worth being with.

At the roof top, Nefera steals their voices (they can still speak, but can't sing properly) using the crystal comet shard. Toralei then sneaks off with it and takes Catty's singing voice to perform at Bloodway. The ghouls then confront her musical-style, Luna not only returns Catty her voice but earns herself fame at Bloodway. Mouscedes then summons taxis for them to return to the promise ceremony. Deuce, who believes he still belongs to Cleo despite their differences, joins them.

At the post-credits scene, Astranova, who now attends Monster High, starts a music battle with her guitar against Operetta and her banjo during Rotter's class.

In "Great Scarrier Reef", She makes a cameo at Lagoona's party, but doesn't do much that is note worthy.

Spectra and Operetta arguing before the Kind Campaign. 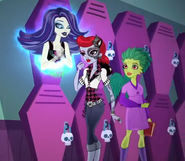 Spectra and Operetta talking after the Kind Campaign. 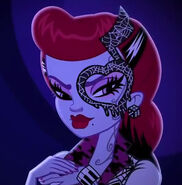 Memphis and Operetta jamming it out.

Operetta and Abbey got a victory hug for the Monster High B Team in Monster Mashionals Part 1.

Operetta and the ghouls in their party outfits

Operetta trying to eat biscuits and gravy, but stopped by Cleo's horn.

"The whole dang holiday was created just for her!". (Her meaning Draculaura)

In the Creepateria with Frankie

Draculaura and Operetta texting on their iCoffins.

Operetta kissing her hand for the enemy (on her Skultimate Roller Maze Outfit).

Retrieved from "https://monsterhigh.fandom.com/wiki/Operetta/cartoon?oldid=344224"
Community content is available under CC-BY-SA unless otherwise noted.