New York Comic Con was first held in February of 2006 as a three day-event. As it continued as an annual event, New York Comic Con was moved to October starting 2010 and became a four day-event, held from Thursday to Sunday, in 2011. Since the beginning, it has been held in the Jacob K. Javits Convention Center. Though the event is primarily about comics, it also promotes numerous media franchises and their products, be they toys, comics, TV shows, movies, etc. 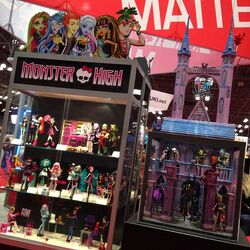 Monster High's premiere at New York Comic Con was announced during San Diego Comic-Con International 2013. As would turn out to be, NYCC 2013 for Monster High was essentially a continuation of SDCCI 2013 in response to the enormous growth in interest in the franchise's presence at conventions. NYCC 2013 featured the same exclusive doll as SDCCI 2013 and the Frights, Camera, Action! - Hauntlywood reveals were split between the two conventions, with Elissabat and Viperine Gorgon being shown at New York Comic Con.

Stand-wise, the Monster High doll-scale model with all the primary dolls was the center piece once more like it had been some months before at SDCCI, though this time with Jane Boolittle present. Other newcomer Catty Noir was posed in the repeat section of the right display case among the full 13 Wishes and 13 Wishes - Haunt the Casbah assortments as well as the "13 Wishes" DVD. Below that was room reserved for in-box reveals of the Sweet Screams, the Picnic Casket for 2, and the Coffin Bean series.

Mattel did not attend New York Comic Con in 2014.

Retrieved from "https://monsterhigh.fandom.com/wiki/New_York_Comic_Con?oldid=336472"
Community content is available under CC-BY-SA unless otherwise noted.