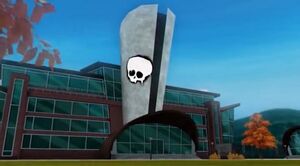 There are five distinguishable students of New Salem High known:

Most monsters got away, but Holt Hyde was caught. Because his headphones were confiscated, he changed back into Jackson Jekyll in his cell, which by a twist of fate wasn't seen by the cops. The next day, the sheriff was surprised to see the human boy in the cell and was easily convinced the monster boy had escaped and locked him up instead. As such, he apologized to Jackson for what happened and gave him a ride to school - New Salem High. At first Jackson was nervous, but he soon found out he as a human was accepted more easily there than at Monster High. He made friends with Chad and Clair, but was eventually recognized as a part-monster by Lilith, who intended to frame him for more acts of vandalism.

Lilith succeeded, but her sense of glory made a deep dive when she learned that the people of New Salem intended to execute Holt. She, her goons, Chad, and Clair teamed up with the Monster High and some New Salem students to save Holt and Jackson and bring an end to monster-human hostilities. Supposedly, New Salem High stopped being forbidden terrain for monsters.

Retrieved from "https://monsterhigh.fandom.com/wiki/New_Salem_High?oldid=346129"
Community content is available under CC-BY-SA unless otherwise noted.