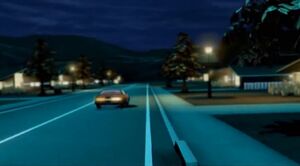 New Salem is a town in the USA, where both humans and monsters live, if largely separated out of mutual preference. It is a fictional, Monster-High-exclusive town either in the state of Oregon or unknown state, but is guessed to be in Oregon because the book series takes place in Salem, Oregon. The same is also true for the various types on monsters in New Salem, who have their own areas within the monster area. Tension from a few centuries past still exists between the monsters and humans, but mostly they leave each other alone. New Salem contains at least two high schools: a high school for the local human population called New Salem High, and an international high school for monsters, called Monster High.

In the Ghoulfriends series, Skelen Moania a zombie and her family were the the first inhabitants of New Salem, as Skelen is the founder of the town's oldest cemetery, the Skelemoanian.

Skelen is part of a rich family that established itself in New Salem at some point between 1500 and 1800. With her family's fortune, Skelen erected the Skelemoanian, New Salem's first and never-surpassed cemetery. The Skelemoanian, which is always shrouded in shadows, contains only a few headstones and mostly holds luxurious tombs, mausoleums, and underground crypts. The Moanias built their own mausoleum on Skelemoanian grounds too, which more due to a design flaw than grandeur became the most atmosphere-inducing construction around. Due to cracks in the marble, wind passing through is transformed, depending on strength, to anything from a persistent buzz to a faint whisper to a loud wail.

In the main series, Halloween had a reputation of being a bad day for monsters, the New Salem monster population hadn't been bothered in years by the human population. So when Monster High was attacked by students of New Salem High a few days before Halloween, preparations were lacking. Especially Frankie Stein, who was to experience her first Halloween ever, could barely cope with the hostilities, and sought for a way to stop it. With a few friends, she found an answer in the Hall of Halloween in the catacombs, where evidence was found that Halloween was originally about celebrating human-monster relations, rather than hunting monsters. But when she shared her findings with her school, most of her friends organized themselves to get back at the humans using their tricks.

Led by Cleo de Nile, a small group set out to vandalize New Salem High. Though they arrived without trouble, taking a path through the catacombs, they found the school already vandalized. Just then, the police arrived, making it seem like they'd done the deed. The group fled and managed to elude the cops until they all came together a little further in town, where they also met up with Frankie and her friends, who had tried to stop the vandalism group. Unexpectedly, the door to one of the houses opened, and a human boy, Chad, invited them in for his Halloween party, thinking they were just dressed up as monsters. Deciding that the party was a safe place, the monsters accepted the offer. They remained in hiding at the party until the arrival of Lilith Van Hellscream, a young monster hunter who had them quickly exposed. Though Chad tried to stand up for them, at the time Holt Hyde was arrested outside, and the monsters had to flee again, leaving Holt behind.

Through sheer luck, Holt could change into Jackson Jekyll when no one was watching, making the cops later think the monster they'd captured escaped, and put the human boy there instead. The sheriff even gave him a ride to New Salem High, where Jackson quickly made friends, but had to hide again when the school band started playing, triggering his change back into Holt. Lilith witnessed this, and spent the night vandalizing her own school further with the intent to blame Holt, as she had been the original vandal, aiming to validate a revival of Halloween as a night of hunting monsters. She had Holt arrested, and was present at his non-trial the next day, where it was decided that he would get the Trick or Treatment, an execution method so gruesome it had not been used in 200 years. This had not been Lilith's intent, so when her act was discovered, she complied to take the blame. But the sheriff was not interested in her story, because letting Holt go then would make him look incompetent.

Frankie came up with a plan to save Holt during his execution and appease the humans with an invitation to a true Halloween party at the Hall of Halloween, which required the efforts of both her monster friends and new human friends. Some parts went easier than others, but the plan worked, supposedly ending the Halloween tradition and much of the human-monster tension in New Salem.

Retrieved from "https://monsterhigh.fandom.com/wiki/New_Salem?oldid=345372"
Community content is available under CC-BY-SA unless otherwise noted.