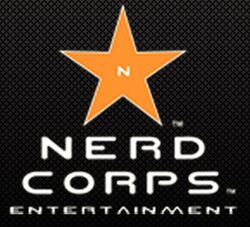 Nerd Corps Entertainment is a Vancouver, Canada-based animation studio that was founded by former Mainframe Entertainment producers Asaph Fipke and Chuck Johnson in 2002. The company specializes in the CGI animation, and mainly creates series based on the company's own properties. The 'exception'-category is dominated by Mattel's properties, such as the Hot Wheels series.

Since 2012, Nerd Corps Entertainment has been put in charge of producing the Monster High TV specials. The first of these, "Why Do Ghouls Fall in Love?", aired on February 12. The last of these, "Great Scarrier Reef", aired on February 12, 2016. The company also worked on "Feary Tale" from May 2015 to August 2015, at which point it was cancelled. Mattel has since taken Monster High off Nerd Corps Entertainment's hands and moved the production of TV specials to Flaunt Productions.

Nerd Corps Entertainment's visual style for the TV specials lies closer to the way the dolls look, compared to the regular webisodes which only loosely take artistic cues from the profile art.

Retrieved from "https://monsterhigh.fandom.com/wiki/Nerd_Corps_Entertainment?oldid=335425"
Community content is available under CC-BY-SA unless otherwise noted.