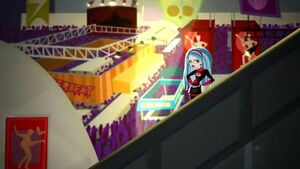 Nekrocon is an annual comic-focused convention in the Monster High world. It is similar to Comic-Con and might even be the same event. Depending on continuity, it either was or is Ghoulia Yelps's biggest goal in life to attend the convention once for its full duration.

Ghoulia currently is the official Nekrocon reporter for the Gory Gazette.

In most continuities, Ghoulia Yelps managed to get a much-desired pass for Nekrocon and had a blast. In the cartoon continuity, she wasn't allowed to go, so she dreamed of going instead.