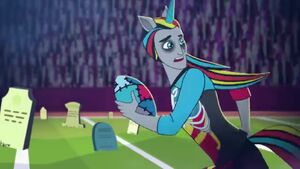 Neighthan Rot debuted in the cartoon series in the Volume 4 TV special "Freaky Fusion", which premiered on September 16, 2014. He is voiced by Josey Montana McCoy in the English version of the cartoon.

In "Graveball Grates", Monster High is competing in a game of graveball (which is like American football played on a large graveyard) and Neighthan is sitting on the bench while Manny Taur moos a Minotaur moo not to blow the game. Frankie comes over to wish Neighthan luck. Frankie tells him that he's got to be the first zombie-unicorn in history ever to play Graveball and asks his position. Neighthan tells her his position is mostly sitting down. Deuce gets run over by a centaur Graveball Player and the centaur knocks him over. Deuce falls near Neighthan with a "dude" in saying, and Neighthan heals him with his unicorn powers. Deuce gets up and goes back in the game. Neighthan tells Frankie that because of his zombie heritage, he is too clumsy to play, and tells her that when one of the players gets hurt he uses his unicorn ability to heal him. Frankie asks if he wants to play, and Neighthan says yes he does, but Neighthan tries to say every time he asks to get in the game he gets rejected and Clawd says "I love ya bro, but--" then Manny says: "You're horrrible! No way!"

Clawd calls in Neighthan, which Neighthan feels nervous about, but Clawd wants Neighthan to heal Manny. Frankie encourages Neighthan on this. Neighthan says he's on it, but trips, and then gets up and says now he's on it. Ghoulia blows the whistle again, and Neighthan runs out onto the field. Someone gives Neighthan the ball by mistake and Neighthan is left running to save his own life. One of the centaurs tries to grab Neighthan, but grabs his helmet instead, and Neighthan is still running. He trips onto the ground and Monster High officially wins the game. Ghoulia blows her whistle one last time. Monster High cheers for Neighthan, and Clawd comes up to Neighthan appearing to be angry, but is actually thrilled with what Neighthan has done out there. He grabs an arm around Neighthan and exclaims that they won, and Frankie jumps in waving her pom poms and says "Thanks to Neighthan."

Neighthan and his fellow hybrids—Bonita Femur, Avea Trotter, and Sirena Von Boo—have just transferred to Monster High as the latest in a line of schools where they try to belong. Neighthan is the most hopeful about their chances, not in the least because it only took him seconds to develop a crush on Frankie Stein, but keeps back on advice of his friends from the other students to spare himself get hurt. He gets an opening at proper contact when the hybrids witness the rehearsals for a play on the origins of Monster High, in part because of the message, in part because several students participating have become fused and effectively are hybrids themselves now. Hybrid-Fusions with little control over their own bodies, that is, which is why Neighthan goes to Frankie and offers that the hybrids each guide a fusion and help them get a hold of themselves again. Neighthan becomes the tutor to Cleolei, the fusion of Cleo and Toralei, whose long-standing rivalry means the fusion is constantly at war with itself. Neighthan teaches them to talk it out and learn to get along, applying his knowledge of psychology to get the desired result. They are only just done when the school comes under attack by a huge entity created by Sparky. It is specifically out for the fusions, so the hybrids and Frankie team up to lure it back to Sparky's laboratory, and bear witness as Frankie uses her own life force to deactivate it. Neighthan joins the other students as they each call onto their bond with Frankie within their own life force to revive her. From then on, the hybrids have a place at Monster High. Freaky Fusion

Neighthan cheers on Sirena during the swim meet alongside Avea and Bonita and is later walking with Frankie, indicating his relationship with her is still going strong. He joins everyone else at the celebration for the newfound friendship between Monster High and Haunted High with the other Monster High students and his fellow hybrids. Haunted

In "Freak Du Chic Act 3", He is seen in the crowd watching the performance.

In "Boo York, Boo York", He is seen slow dancing with Frankie Stein.

In "Great Scarrier Reef", He is also one of the students that sees the video of Lagoona that Toralei filmed on her phone of Lagoona having stage fright humiliating herself. He makes another cameo appearance at Lagoona's party, but he doesn't do anything note worthy. 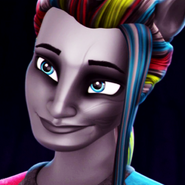 Neighthan offers to help Frankie back to her feet

Neighthan watches as Avea refuses Frankie's offer to sit with them

Neighthan argues that Monster High will accept them, even with their freaky flaws of being hybrids

Neighthan watches Sirena as she gets easily distracted again

"There, see? I told you Monster High is different."

Sitting down to watch the rehearsal

Watching as the play goes wrong

Now it's getting really bad

This is just embarrassing...

Listening to Bonita as she can't stand this anymore

Time for Neighthan to offer Frankie the help of the hybrids

Add a photo to this gallery
Retrieved from "https://monsterhigh.fandom.com/wiki/Neighthan_Rot/cartoon?oldid=344217"
Community content is available under CC-BY-SA unless otherwise noted.