As clumsy as I am, I think the only pet I'd trust myself with is a mastodon, and I hear they take up a lot of room.

Neighthan Rot is a 2014-introduced and all-around character. He is a hybrid, the child of a unicorn and a zombie, making him a "zombicorn" as he likes to call himself and a student at Monster High.

Like his longtime hybrid friends —Avea, Bonita, and Sirena—, Neighthan has a history of going from school to school because he fits in nowhere. Despite this, he still tries to give everyone a chance and is socially highly developed. Being half a zombie and half a unicorn, Neighthan can speak regular English and has healing powers, but he's also very clumsy. He can barely take two steps without tripping or knocking something over, meaning his healing powers are mostly used on himself. He has a crush on Frankie Stein, whom he shares many traits with, and the interest is mutual, but they are currently not dating.

He is voiced by Josey Montana McCoy in English.

Neighthan Rot is tall and slender, and has grey skin, which is more zombie-like on his left half. He has unicorn ears on top of his head, a blue unicorn horn and blue eyes. He has long black hair in a ponytail with red, blue and yellow streaks with a lock of hair framing the left side of his face and a long tail with streaks of red, blue, and yellow.

Despite his young age, Neighthan is shown to be a very compassionate, mature, open-minded, and patient person. Out of all his hybrids friends, Neighthan is the most optimistic and friendly to the other students once they transfer to Monster High. Due to his past experiences of being judged for his appearance and mixed heritage, he doesn't like monsters judging others based on their appearances. In Neighthan's diary, it is revealed that he wants to a psychologist to help people with their emotional issues and provide a trusted ear for them to confide in. He is very selfless and thoughtful, as he was prepare to give up his spot for one of his friends if wasn't any room at the school and is very attentive to his friends. Therefore, he displays a lot of emotional maturity and is a social, helpful monster who loves hanging out with his best friends.

Neighthan is also very clumsy, which he acknowledges, and is a bit embarrassed about since he ends in injuring himself a lot. His favorite foods are fried pickles and brain puffs, only not together because he thinks it would be nasty. Though it may or may not be a unique ability or special ability, he does possess the ability to speak human-and-other-monsters English, which his father may or may not have, and where he probably gets from his unicorn mother.

In "Party Monster", He makes a cameo running from a monster that turns out to be Heath Burns who looked more like a large fuzzy monster. In one panel his horn is black rather then blue.

Being that his mother is a unicorn and his father is a zombie, he likes to call himself a "zombicorn". Neighthan got his zombie clumsiness from his father, and got his healing ability from his mother. He loves both parents deeply, and according to his diary, his mother has the ability to turn herself into a two-legged creature since she is a unicorn, similar to a horse, and usually has four legs.

He is best friends with Avea Trotter, Bonita Femur and Sirena Von Boo. Neighthan also gets along well with Frankie Stein and her friends, but is typically a very social monster. Among his hybrids friends, Neighthan seems to act as the leader and spokesperson of the group since he is the least wary when interacting with other students.

Neighthan does not appear to have any romantic interest in any other monster other than Frankie Stein. They first met when Neighthan and his friends just transfer to Monster High and Neighthan help Frankie up after she tripped on the floor. The two were instantly smitten with one another and become close as Neighthan helps Frankie and her friends, and proving emotional supports to Frankie over her personal issues. He appears to be shown clumsier than usual when around Frankie, which the latter seems to find adorable.

In his dairy, it reveals that Neighthan knew Frankie before he entered the school because he saw her from afar during his meeting with Headless Headmistress Bloodgood and described her as "perfect" in his diary, and stated that he had nothing in common with her because he asks himself how he can have anything in common with perfection. Frankie and Neighthan's love was hinted as shown in a dance music scene of the Boo York, Boo York movie, where Catty Noir was singing "Search Inside". 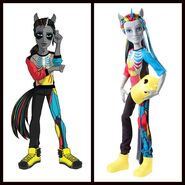 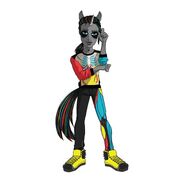 Add a photo to this gallery
Retrieved from "https://monsterhigh.fandom.com/wiki/Neighthan_Rot?oldid=346062"
Community content is available under CC-BY-SA unless otherwise noted.