Nefera de Nile debuted in the cartoon series in the Volume 2 webisode "Hyde and Shriek", which premiered on June 23, 2011. She is voiced by Wendee Lee in the English version of the cartoon.

Nefera is mentioned by Cleo de Nile when she comments on her broken cellphone, saying its just another thing her dad will use to compare the two sisters, but also expresses her contentment that Nefera is out of the country, revealing to Ghoulia Yelps that she has had a party all blamed on her by Nefera. Miss InfearmationShe's mentioned again for the same reasons by Lagoona Blue, at Cleo's party, when she worries it might be a bit too much. Just as they discuss the possibility of Cleo being caught, Nefera storms in and finds the party going on, immidietly threatening Cleo of telling off to their dad. Cleo gives in and claims she'll do anything Nefera wants for the rest of the summer, an outcome Nefera is pleased with. Hyde and Shriek At the mall, Cleo, Lagoona, Draculaura, Clawdeen Wolf and Frankie Stein talk about how Cleo is still waiting on Nefera, who walks in on the girls talking behind her back, claiming she's glad they're talking about her, before taking all their Back to School shopping bags, threatening to tell her dad about the party if they don't let her. However, she notices it's time for her salon attendement, so she leaves. She's mentioned by Toralei Stripe as she acknoledges the Nefera is back in town and decides that she's going to follow her to catch on what she's wearing. Meanwhile, Nefera's back and notices the girls are all wearing random ridiculous items on them, but is told that they're the hottest trends. Having her fashion forward knowledge questioned, she immedietly sais she is aware of so and demands to have the items. She puts them on quickly and strots around the mall, showing off her new "fashions". Nefera Again

Headmistress Bloodgood calls the Fearleading Squad for a meeting, with the goal of announcing that Nefera is their new coach (due to her previous successes) who storms into Bloodgood's office, dramatically.Dueling Personality At the gym, Bloodgood gratulates Nefera as the new coach, who announces she doesn't intend to loose this Monster Mashionals, and that she'll have no mercy. Clawdeen questions why she is so interested in them when she is an international model, so Ghoulia shows that she has been kicked out of Fashion's Week due to her attitude, showing the tabloid news on the big screen. Later, Nefera presents a new routine to the Squad. When they perform a routine, Nefera is dissapointed and changes the routine, and does so several times, until she leaves, unable to cope with such incompetence. She comes back however, to make an announcement, claiming that she realized she couldn't just come there and lead them to victory, making the Squad believe that she'd be quitting. However, what she really meant is that she wasn't willing to lead them, dimoting them to the B Team, adding brand new members to the A Team: Toralei, Purrsephone and Meowlody.Neferamore Rising From the Dead Nefera's guards block every possible practacing place at school and Cleo receives a text from Nefera that tells har she made it against the rules for the B Team to rehearse on school grounds. Finally, Monster Mashionals have arrived, and Nefera and her A Team are present, making it to the finale, which is against the B Team no less. She intimidates them showing them a bag full of her family's idols and amulets, which she plans on using to defeat them, sarcastically wishing them luck.Monster Mashionals Part 1Toralei tells Nefera that they don't need to cheat to win, yet Nefera's confident that "only a De Nile can beat a De Nile". Nefera sneaks during the A Team's performance and uses the amulets to cheat, first attempting to shoot a ray at the squad, then shutting of the lighting of the stage, summoning a servant that throws a disk at the Team, unleashin a spirit and releasing a monster into the stage, all failed attempts since Cleo's friends keep protecting her. When it is revealed that Monster High's B Team has won, Nefera looses' it and claims her status as their coach back and stealing the trophy from Scary Murphy's hand, announcing she's the true winner and that she had more victories than anyone ever. However, Ghoulia reveals that she has recorded every of her failed attempts at cheating and plays them at the big screen, having Scary Murphy stripping Nefera of all her previous trophies, as well as this one, making her scream and leave crying, completely devastated.Monster Mashionals Part 2

She is approaching Monster High when she meets Cleo at the stairs, and is suprised when she compliments her. Paying it forward, she allows the Kind representatives to exit the school before her. Kind: The Shockumentary

Cleo intends to take some of Nefera's clothes with her to Skull Shores, but the suitcases containing them fall into a dark nothingness in the catacombs. Cleo doesn't care. Escape From Skull Shores

Nefera stands by her father, Ramses, with believing in Cleo leading the monsters in retaliation against New Salem High, but against Cleo with her relationship with Deuce and wants Cleo to dump him. When Cleo and Deuce get back together during the Halloween party, Ramses and Nefera hear everything via Cleo's iCoffin, but she leaves it on the table as she goes off to dance with Deuce, leaving Nefera to listen to Ramses as he yells at Cleo to come back at once after disobeying their requests. Ghouls Rule

Unable to remember Cleo, Deuce concludes her familiarity comes from her resemblance to her older sister. 13 Wishes 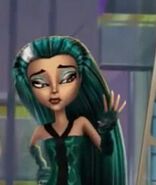 Retrieved from "https://monsterhigh.fandom.com/wiki/Nefera_de_Nile/cartoon?oldid=343398"
Community content is available under CC-BY-SA unless otherwise noted.