Mr. Hackington or simply Hackington, commonly shortened to Mr. Hack, is a 2010-introduced and fiction-only character. He is likely a human and a teacher at Monster High. He officially teaches Mad Science, but also performs custodian work. While devoted, Hackington is, in general, an unpleasant teacher, who employs strict rules and surprise tests more to inconvenience his students than to teach efficiently. He started his career as a professional Igor, carefully working his way up in the world of Mad Science and making many connections along the way he still holds dear. His enthusiasm for his lifework is one of the few pleasant sides he shows his students and he expects them to appreciate it and memorize the details of his stories for future tests.

In English, he is voiced by Audu Paden. 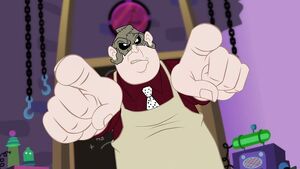 Mr. Hackington is an energetic, possibly British man who enjoys his job greatly. He's also slightly eccentric, having a tendency to burst into maniacal laughter. He is the only teacher at Monster High with a specific set of rules to follow during his class, complemented by a set of harsh punishments for whoever fails to follow them. For instance, if a student arrives so much as a second too late, they are excluded for the entire class and forced to make up for it on Saturday. Another example of his harsh attitude is that he doesn't want his students to have too much fun, as he believes this distracts them from the subject matter.

Nonetheless, Hackington is a very social man who delights in sharing his knowledge. For instance, he's the faculty sponsor for the student creature-watching club and regularly organizes trips down into the catacombs to study the local lifeforms. He also loves to tell interesting stories about his long career and the other scientists he has worked with, which sometimes takes up the entire class instead of only the first half. Fortunately, for the students, Hackington considers all his stories as must-know information and will use questions from his stories on his tests. Even better, Hackington has a tendency to emphasize information he finds important by laughing so hard that he starts hacking.

He's a tall yet round man, who has dark eyes, light skin, and hair on his arms. He wears a dark grey stitched up mask that covers only the top of his face. He wears a dark red button up shirt, a white tie with black polka dots on it. He also has a apron on, black pants, and black shoes on. His teeth are also crooked some protruding out of his mouth. 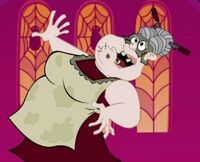 Hackington's mother made an appearance in the webisode "Freakout Friday". Hackington accidentally caused her to break her back by standing on a crack.

For his first class that year, Hackington asks his students if they know what Burnwidth Serum turns into when heated to one hundred degrees Fahrenheit. Only Cy knows it turns into a zombification serum for cold-blood creatures, which puts him on Hackington's good side. Ghoulfriends Forever

When Deuce and Cleo disturb his class, he gives them only one warning before he sends them to Bloodgood's office. Hissy Fit

Retrieved from "https://monsterhigh.fandom.com/wiki/Mr._Hackington?oldid=344307"
Community content is available under CC-BY-SA unless otherwise noted.