I'd like to have a pet someday. Maybe something tiny and cute that I can carry in my purse.

Mouscedes King is a 2015-introduced and all-around character. She is the daughter of the Rat King and is originally from Upper Beast Side, Boonited States of Scaremerica.

In English, she is voiced by Rachel Staman.

In Spanish, her voice is of Ana de Castro, while her German voice actress is Marie-Isabel Walke.

Mouscedes' family is part of the Rat Royalty in Boo York. The King family is said to have built the city of Boo York, ground-up. Her father is the Rat King, who is really infamous in the city's community for being a rat who roams the sewage(s), yet he remains influential.

As Boo York royalty, Mouscedes has a lot of connections all around the city and has a tad of power herself. Being a socialite celebrity, she has some influence around her parts, making it easy for her to go around town easily, as taxis will stop at her feet. This is useful for her because it is great for her two favourite hobbies: shopping and party-planning.

She isn't just in love with shopping, she's infatuated with it. Since her father is rich and she's always been given everything she wants, she will not consider going out  of a store without purchasing something, and will find the most absurd excuse to do so. She adores being pampered and her luxurious life is everything to her. She even has really high standards in what she does or gets, and while other people can see her as picky, she just wants to have the best experiences she can. It also doesn't help that she's lactose intolerant so whenever she goes out for a snack she can't help but come out as very pretentious, since she must be selective in what she eats.

Her love for party planning derives from the fact that she just has so many connections and will to please others that she might as well just focus on planning these celebrations, usually formal get together like dinners and brunches. Her high selection and determination makes her a great party planner too. Additionally, as a Upper Beast Side native whose family was among the first inhabitants, she knows the city like the palm of her paw, so it's easy for her.

Aside from her passions, she has her heart in the right place, and knows when to judge when a situation is right or wrong, and really dislikes when people take advantage of other's blissfulness, especially since she's surrounded by locals who trick tourist daily. She's usually really nice and sweet, she's also sassy and determined. Strict and straight to point when the world needs her to, she's intuitive and fast talking, usually with a squeak within words, and gets pretty comfortable with strangers, bubbly and open with anyone. She can sometimes be a bit bossy, but it comes from a place of caring, wanting to make the moment as perfect as possible, and with her good taste, she just might, if she works hard for it.

Mouscedes is a petite wererat girl, quite short for her age, with grey skin, long soft bubblegum-pink hair, a bald pink rat tail, and big grey rat ears with pink insides. She also has pink eyes. Above her mouth, she has whisker markings as dots, and buck teeth peeking out of her mouth. Her fur is noticeably longer on her lower arms and legs. Her outfits and accessories are cheese-themed since cartoon rats are typically shown as eating cheese, while her tiara somewhat resembles a cheese grater. She usually dresses in shades of yellow and turquoise. Her shoes also resemble ballet slippers, since her father the Rat King is the villain in the Nutcracker ballet. This is further hinted at because Mouscedes enjoys dancing.

Mouscedes is loosely based on the cryptid of the Mouse King or "Rat King" as it is most commonly known by. The Mouse King myth comes from Medieval Europe and is said to be a group of mutated rodents who all have their tails conjoined to one another making all of their bodies operate as one creature and they were often seen as bringers of illness and bad luck. The figure was further popularized by author E.T.A Hoffmann's 1816 story, "The Nutcracker and the Mouse King" where the villain of the story (the Mouse King) is a giant, intelligent mouse with several heads, legs, and tails all attached to one another, a detail which was removed in the story's more notable ballet adaptation. 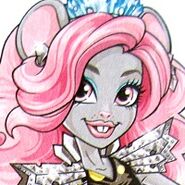 Add a photo to this gallery
Retrieved from "https://monsterhigh.fandom.com/wiki/Mouscedes_King?oldid=351459"
Community content is available under CC-BY-SA unless otherwise noted.