⁂ Welcome to Monster High! ⁂
Where the Teenage Children of Legendary Monsters Make a Difference! 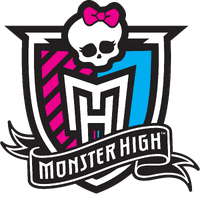 Monster High is a multimedia-supported doll franchise from Mattel that was launched in 2010. Its story revolves around the terrific teenage descendants of the world's most famous monsters as they brave the trials and tribulations of a mixed-creature high school in a world that's barely ready for that. Making a few enemies and lots of friends along the way, the students find their way through trouble both big and small. The Monster High Wiki strives to be an encyclopedic resource for all things Monster High and all help is welcome. Be sure to read the articles linked to on the right, however, as there's many regulations in place for even more reasons.
⁂ Cast ⁂

Monster High follows the lives of the student population of the franchise's titular high school: Monster High. Whether they deal with everyday problems or struggle their way through an adventure, sitting still is rarely part of the schedule. Joining in their ordeals are the staff of Monster High, the humans from nearby towns, students of rival schools, and an assortment of other colorful figures - both ones with good intentions and ones with bad intentions. For example,

Have you already been introduced to this character?
Abbey Bominable
And would it be known to you that they:
If you wish to learn more about
Abbey Bominable,
please visit their
own article on this wiki!

— Monster High: The Movie new sneak-peeks and posters have been revealed on the Monster High twitter and social medias.

- A new Skullector doll has been announced on the Monster High twitter! Featuring the character "Dracula"

- New 2021 Skullector dolls have been leaked/announced on the Mattel Creations website (the listing has now been removed), featuring official photos of Skullector Beetlejuice and Lydia Deetz dolls.

The set retails for 90$ and releases on August 13th.

- Monster High has announced new play line dolls that’ll release in 2022 and be sold in store shelves! Keep a eye out!

- Monster High has announced brand new merchandise that’ll release in 2022 and be sold in store shelves! Keep a eye out!

- The live action adaptation of Monster High is the latest announced TV special, expected to release in 2022.

- A new Nickelodeon animated series based off the Monster High doll line will be released in 2022.

Can you guys help me with my edit?

i Was wondering if anyone can point out flaws in my edit, Im new to the whole MH thing and i wou…

Mines is Whisp and Val. When they first released I remember w…