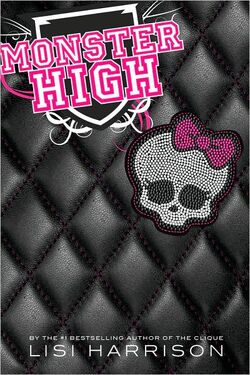 Written by Lisi Harrison and published by Little, Brown and Company, the Monster High book series is the first of the two book series attached to Monster High. The series was announced on June 03, 2010 and said to become a series of six books.[1] On April 13, 2012, with the fourth book being readied for release, a suspicion from Toy Fair 2012 that the fourth book would be the last of the series was confirmed on Harrison's website.[2]

The continuity of the Monster High book series is vastly different from the other Monster High continuities. Rather than Frankie Stein, the role of protagonist is shared between Frankie and the book-exclusive character Melody Carver, with a balance tilted in Melody's favor. Each of the books tells an ongoing story through the eyes of one selected character. In the case of the first book, it's Frankie Stein, the second is about Cleo de Nile, the third about Clawdeen Wolf, and the fourth one about Draculaura. The thirteenth chapters of all four books are missing from those books and were released on special occasions. The thirteenth chapters focus on Ghoulia Yelps.

The following books make up the series: