Was I not clear? I have an entire herd of pet zombies.

Moanica D’Kay is a 2016-introduced and all-around character. She is a zombie and a student at Monster High. A revolutionary to the core, Moanica rejects the idea that monsters should patiently convince humans to stop hunting them down some day. She is tired of hiding and running, and if the fastest way out is giving humans a taste of their own medicine, so be it. To her frustration, while her words do strike a chord with her peers, not many are willing to join her army. In fact, all her backup consists of are other zombies, collectively known as the Zomboys. One advantage Moanica has, which may or may not have played a role in establishing the Zomboys, is a willingness to turn humans. She'd turn monsters too, but they are immune to her touch and require a psychological approach. Moanica's successes so far are limited, but as long as she's standing, she's striving.

In English, she is voiced by Cristina Milizia. In Spanish the character is voiced by María Alcázar in Mexico and, Mariana Martí in Argentina.

Hailing from Spain, Moanica is a monster who's been hit hard by the consequences of the Fright Flight. Motivated by both a desire to ensure her own safety and to take revenge on the humans for an unlife forced in hiding, her waking hours are dedicated to fighting back, if need be by destroying all of humanity. Her first large accomplishments were the formation of her own army, the Zomboys, and conquering a cemetery to make it a no-go zone for humans.

Like many, Moanica received word of Monster High, but unlike many, she wasn't interested and attacked the Ghoul Squad when they came looking for her. She later realized that Monster High would be a perfect location to pursue her dreams of a larger monster force and joined up after all, being accepted with little question. Welcome to Monster High

Moanica maintains a very simple scheme to view others through: either one's a human or one's a monster. Humans she loathes. This hostility comes from humankind's endangerment of monsters that forced the worldwide community into hiding. Monsters have options: either one's with her or one's against her, and one better prays that in the latter scenario they're beneath her notice. In Moanica's ideal world, the other monsters would unanimously share her vision and lend a helping hand driving the humans back, but as it is, the only allies she has are the Zomboys. Welcome to Monster High Although she is tough on them and does not think highly of their intellectual capabilities, Moanica likes them and corrects herself when she realizes her toughness is turning into unfairness. The affection is mutual as it is less her anger at them and more her disappointment in them that the Zomboys fear for when Moanica's plans go fruitlessly. Electrified

Moanica has deep gray skin and glowing, light, aqua-green eyes with dark green tint or tinge, as well as metallic bright-dark purple hair, long and straight, with a single chartreuse-green streak. She is tall and athletic with a slim, curvy body and an oval-shaped face. Around her eyes are light but noticeable tainted veins (these are not reflected in her dolls). Her clothes are overtly grunge with a paint-splatter pattern. She wears a yellow and pink tank top under a distressed dark grey denim vest with deep green blobs on it, with black acid wash denim jeans. In "Welcome to Monster High", she has light cyan-blue eyes which appear slightly greenish teal or turquoise in the dark. One of her dolls has a dress with green and dark pink paint splatters on it and a studded rose belt. Her main colors are purple, green, and pink. Her accessories are anatomical (mostly brains and bones) and worm-themed.

She may be part vampire, since she possesses fangs, glowing eyes, and claws.

Her intimidating and authorative disposition leave Moanica with few to call her friends outside her inner circle of many, many zombie servants. The lot of them are known as the Zomboys.

Moanica considers the Zomboys enough of a handful to consider any pets.

At present, Moanica has no romantic interests. 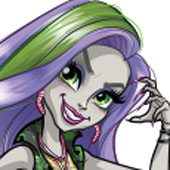 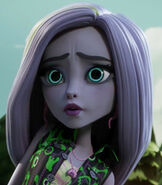 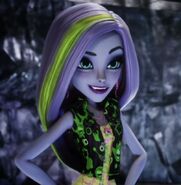 Add a photo to this gallery
Retrieved from "https://monsterhigh.fandom.com/wiki/Moanica_D%E2%80%99Kay?oldid=346188"
Community content is available under CC-BY-SA unless otherwise noted.