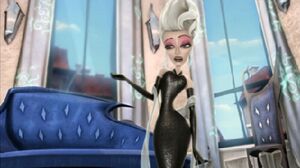 Moanatella Ghostier is a famous fashion designer and the main antagonist from the 2013 television special, Scaris: City of Frights. She lives in Scaris and plays a cruel "game" of pretending to look for an apprentice, but when she chooses the apprentice she locks them up and forces them to create designs for her. Clawdeen Wolf and Garrott du Roque are her known "apprentices", and they were lucky enough to escape from her. Later, at the fashion show, Clawdeen and Garrott get back at her.

She is voiced by Cindy Robinson in English.

She's had "apprentices" before, kidnapping Garrott du Roque and locking him up, so he'll create designs for her to keep her own fame, so she won't lose recognition and disappear. She selects three new designers to compete against each other, being Clawdeen Wolf, Jinafire Long, And Skelita Calaveras. Only to want one of them, so she can kidnap one of them and use their designs and claim it as her own.

Somewhere, in Moanatella Ghostier's Headquarters, Skelita and Clawdeen talk about Skelita's tribute to her family. Clawdeen notices Jinafire's book around and decides to see her designs, but Jinafire becomes angry and scolds Clawdeen about the competition and that they're not supposed to be helping each other. Back in Monster High, Clawd Wolf (who becomes mega jealous of Draculaura, being in the most romantic city in the whole world without him - thanks to Heath Burns) seeks help from C.A. Cupid, and misunderstands her advice. He flies to Scaris with Deuce Gorgon (who misses Cleo a lot) and Heath, even when he told him not to go.

Back in the headquarters, Clawdeen was shouted at by Moanatella for the third time for not following the rules of fashion. Later on, she finds courage to look for inspiration on her old sketch book but Moanatella comes and tells her to throw it away, so she does after Moanatella goes through the floor. So, she starts designing like her the same time Toralei seems to make the frightseeing less fun for the other ghouls. After that, Moanatella tells the three designers that if they hear her ring the bell for three times, it meant she made a decision. She leaves after saying this.

Back to Frankie and Rochelle, they are now in the Catacombs of Scaris, where they are lead by vines of the special rose bush to the forbidden area where it is said that no monster who came in ever came out alive. They find Garrett who has been used by Moanatella for his fashion designs. This was why he couldn't write to Rochelle anymore. He tells them whoever wins Moanatella's "apprenticeship" will be locked up in the same place and be used just like him. At that moment, Moanatella and Clawdeen enter, and Moanatella traps Clawdeen in a cell with Garrott, Frankie and Rochelle.

The Ghouls crash Moanatella's show and show off Clawdeen's real fashion line. The people love it and cheer Clawdeen, causing Moanatella to vanish forever because no one is paying attention to her.

Moanatella is very cruel, shown when she pretends to look for an apprentice but locks them up to make designs so she doesn't lose her fame. She is willing to do anything to keep up her image of fame no matter the cost. She is also very manipulative claiming to want an apprentice only to lock them away and use them for their talents, or only has them create clothing she approves of. So, she seems to be very power-hungry as well. Also she does not hesitate to call her designers and their fashions horrible and other things. Most of the time she is able to put up an act, but when she starts to lose recognition she loses her cool, yells, and starts to panic. She also shows at least some care for her black cat.

When she loses recognition, she begins to slowly cease to exist.

She has fair skin, dark eyes, and white hair in an updo style. Around her feet she forms smoke. She wears and black dress, black shoulder high gloves and see though white scarf around her arms. Her black cat is usually around her shouldres.

In "Nefera Again", Clawdeen bought a necklace from designer Jean Maul Ghostier. Based on the last name, Jean may be related to Moanatella.

Retrieved from "https://monsterhigh.fandom.com/wiki/Moanatella_Ghostier?oldid=346722"
Community content is available under CC-BY-SA unless otherwise noted.