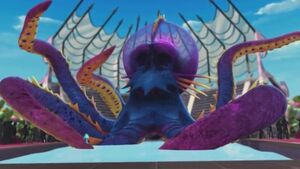 Mr. Mer'ri, commonly known as the Kraken, is a 2016-introduced and cartoon-only character. He's a gigantic octopus monster, the father of Kala Mer'ri, who lives deep in Great Scarrier Reef.

In the English dub, the Kraken's vocal effects are provided by Piotr Michael.

As a kraken he's a large octopus like monster causing humans and some monsters to fear him, as unlike monster monsters he isn't more humanoid in shape. Despite this he still care for his daughter, and lives with her in a cave that also has parts of a sunken ship in it.

Kala could blend in but he could't so he would miss out on her dance performances, all the time. The only reason he didn't go see her dance is because of the rumours that are spread about him, and him arrive at Kala's performance could cause panic.

He is shown to care dearly for his daughter, willing to do anything for her, even if it means attacking monster high.

He's a monstrous purple octopus creature, a big beak like mouth and red fiery eyes. From their bags three feelers sprout, in each side, that fade from purple to red and gold.

Mer'ri's only immediate family he's in contact with is his daughter Kala. They love each other dearly, but for the longest time their ability to form a happy family was burdened by Mer'ri's undeserved reputation as a disgusting and dangerous monstrosity. Unlike him, Kala has the looks and the size to blend into society and they arranged for her to do so. The downside was that this meant that for years they only got to see each other on Sundays and the psychological toll it took on Kala wasn't small either. Finding themselves in an environment hostile to them, Mer'ri and his daughter came to look out for each other first and foremost. Mer'ri didn't question whatever Kala asked of him and Kala filtered what she told her father. For instance, it wasn't until Lagoona got through to Kala that she introduced her as her childhood friend. Following Kala's admittance that the Kraken is her father, the two have opened up to establish a healthier family life. It's also implied in dialogue Mer'ri has a significant other they are just never seen. Great Scarrier Reef

He is not shown to many friends as most people fear him, for the most part he only had a positive relationship with his daughter Kala Mer'ri. Thou near the end of the film he is more open to making friends.

Retrieved from "https://monsterhigh.fandom.com/wiki/Mer%27ri?oldid=344155"
Community content is available under CC-BY-SA unless otherwise noted.