Memphis "Daddy O" Longlegs is the pet spider of Operetta.

Memphis is a greyish-purple spider. He has black, greased, Elvis like hair which he combs with a red comb. He also wears a red tie. In the webisodes he is a more intense purple, wears blue-rimmed Buddy Holly glasses, wearing a black suit, black gloves and red Converse shoes. 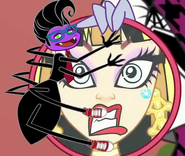 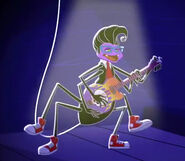 Memphis and his bass