I like baby griffins cause they're so fuzzy, cute and playful. What? Just because I don't show my soft side doesn't mean it's not there.

Manny Taur is a 2011-introduced and all-around character. He is the son of the Minotaur and a notorious bully, whose favored victims comprise Jackson Jekyll, the devil boy, and zombies. Manny used to be a victim of bullying himself in middle school, but gained height and muscle just before enrolling at Monster High. It wasn't long before he began to inflict on others what had been inflicted on him. Eventually, though, he took note of his error and has since been working on getting out of the cycle, but his old behavior is stubborn. Fortunately, he has collected a number of friends around him who know when to be patient and when to be direct. It's partially thanks to their efforts that he has even managed to start a relationship, if rocky, with his dream girl: Iris Clops.

He is voiced by Audu Paden in English.

In the Hebrew version, he is voiced by Guy Roshiniack, who also voices Deuce Gorgon and Rotter.

Manny is initially a typical bully, usually picking on weaker monsters or those who annoy him. He was seen picking on Jackson Jekyll in "Miss Infearmation" and was heard to be bullying Howleen Wolf in Abbey's 'School's Out' diary. He has a dislike of zombies, due to them being so slow, and does not believe that they should be allowed to play sports such as dodge ball. He is often quite gross and indecent, violent, and rude.

Recently though, Manny has tried to change his ways, and while he's still very gruff toward others, he hasn't bullied anyone for a while, and is often seen hanging out with his friends and playing sports, which he enjoys greatly. In his diary, he revealed that he himself was bullied in middle school, and when he received a growth spurt before joining Monster High, he was all too eager to return the favor on his tormentors, and kept on bullying people just for fun. An encounter with Abbey convinced him to change his ways.

Outside of sports, Manny is a fairly easy going guy, but he flies into a rage whenever he sees the color red, and feels compelled to charge at it. He may act tough and scare everyone he sees, but the truth is that Manny is a very troubled person. Because of his self-consciousness about being the only minotaur in his family that can't handle mazes Field of Screams and because of his clumsy ways, he chooses to hide behind his own ego and not let people see his soft side. At times he does try to express this nicer side of him to other monsters, like his girlfriend Iris, but doesn't seem to know how to do so properly. For instance, in the comic I Only Have Eye for You, he tries to compliment Iris by calling her clumsy because it meant he had something in common with her, though Iris takes it as an insult and is upset.

Being a minotaur, Manny is half-bull, half-man in his appearance. Manny also has a nose ring and wears a red shirt with a labyrinth printed on it, and blue jeans. He has sandy blond hair and is quite muscular. He also has tan skin or fur on his body.

He has a sister named Minnie whom he fears knowing of his bullying, but whether that is because he's afraid of her or for her is unclear.

Manny didn't have any friends during his days as a bully, but nowadays he considers Heath Burns to be his best friend. He has also been seen hanging out with Clawd Wolf in many of the webisodes and movies. He also has his teammate Deuce Gorgon as his best friend since they're in sporting events.

In "The Need for Speed", Manny is seen walking with Simon Clops indicating a possible friendship. On his profile bio, it said he is best friends with Heath Burns and Iris Clops.

Manny Taur has dated a few times before going steady. For instance, he was walking arm-in-arm with a pink animal girl, both looking happily at each other, though at Draculara's Sweet 1600 party, he was later shot with one of C.A. Cupid's love arrows and temporarily fell in love with Slo Mo. Why Do Ghouls Fall in Love? In "Hiss-toria", he hands flowers to Meowlody.

Recently, he has started dating Iris Clops. While he cares a lot about her, his tendency to say the wrong thing and lack of experience with girls sometimes results in misunderstandings between them. While his friends try hard to help, their relationship is a little ruff, with many disagreements and the two seem to break up a lot. Their relationship seems to be popular for that reason. When Spectra asks Operetta for a scoop, she tells her Manny and Iris broke up, and then went back again, to which Spectra replies that she wants fresh news, not old ones, implying it's a recurring issue. Haunted Apart from this, the two love each other and share traits that bring them together and, even though they're natural opposites, they are caring of each other. Manny is very protective of her. 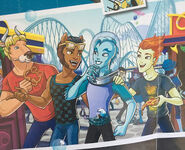 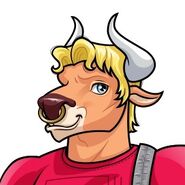 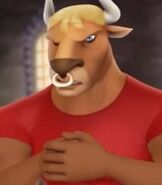 Manny Taur about to bully Jackson in the monster high movie series
Add a photo to this gallery
Retrieved from "https://monsterhigh.fandom.com/wiki/Manny_Taur?oldid=345314"
Community content is available under CC-BY-SA unless otherwise noted.