I don't think there's a pet undead that can keep up with my hectic schedule.

Luna Mothews is a 2015-introduced and all-around character. She is the daughter of the Moth Man, and is from Boo Jersey. She aspires to be a performer on Bloodway.

In English, she is voiced by Lauren Weisman.

Her singing voice is Fioorzeh Scott.

Luna is very talented in singing and dancing, and longs to become a big star on the stage. To that end, she has moved from her home in Boo Jersey to Boo York in the hopes of landing a big role somewhere. Like many aspiring performers, she's had to take on several jobs to support herself, such as serving food or selling souvenirs, but she sees the experience as a chance to do something new and promote herself. She's extremely confident and optimistic, but as a moth, she can be easily distracted by bright lights.

Luna has yellow skin, black hair with red highlights and large orange moth wings. Her hair is styled into two ponytails, also known as pigtails or twin-tails, which are medium length. She has red eyes and two black dots near her eyebrows. She also has black antenna. She prefers to dress in goth fashion, calling herself a goth moth, and she really likes to add blasts of bright colours in her dark outfits. She wears black lipstick, and wears butterfly like sunglasses.

Luna is the daughter of the folkloric of the Mothman who is a cryptid from the American state of West Virginia. The Mothman is said to be a flying 10 foot-tall owl/human hybrid who is often described as looking similar to an owl and is always said to have glowing red eyes. The Mothman was first seen during the 1960s and over the years has gained an additional myth of either being able to see into the future, or bringing calamity wherever it goes due to it having been sighted (and sometimes photographed) at locations before famous disasters.

During her time in Boo York she built a strong friendship with Elle Eedee and Mouscedes King.

Her father is the Mothman, who she calls Pop. It is known that he is very protective of her daughter and likes to tell very cheesy jokes. Her mother is most likely a moth monster too. 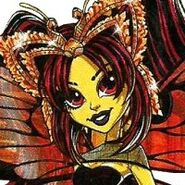 Add a photo to this gallery
Retrieved from "https://monsterhigh.fandom.com/wiki/Luna_Mothews?oldid=351466"
Community content is available under CC-BY-SA unless otherwise noted.