I always wanted a dry land pet like a Highland cow

Lorna McNessie is a 2014-introduced, all-around character and an exchange student, exchanging to Monster High from Loch Ness in Rotland, where she used to live happily in an underwater castle alongside her father, the Loch Ness Monster. However, when her love for photography compromised her family's safety, it was agreed it was better to move out of Rotland and study somewhere else, like Monster High.

She is voiced by Marieve Herington in English.

Lorna is a fun loving, mischievous ghoul who loves to play little jokes in order to make people laugh and add a bit of fun to her day.

Her favourite activity is photobombing whenever someone takes a photograph, and over the years she's become an expert in appearing in photographs in the most unexpected manner possible. This isn't quite appreciated by her parents, who would prefer to stay hidden from the prying eyes of humans.

Lorna is a water creature with scaly and sparkly light blue skin, fins on her arms and legs, webbed hands, and curly red hair. She also has blue eyes, and red lips. She likes to dress in clothes with bright, tartan patterns. Her shoes resemble castle bricks. She also has a long finned tail, and sharp teeth protruding from her lower lip.

Lorna is good friends with Marisol Coxi, Howleen Wolf and Twyla after chatting with them via video chat before her trip to Monster High, as well as Gillington "Gil" Webber, who has been the most welcoming figure for Lorna during her stay at Monster High. Lorna is also friends with Finnegan Wake, as stated on the website.

Lorna's father is the Loch Ness Monster, who is a bipedal freshwater monster with a red beard instead of the dinosaur-like creature he is typically depicted as. Lorna's diary reveals that she also has a mother, several aunts, uncles and cousins, and a Grandmother, whom inspired her to take up photobombing in the first place. Lorna's webisode debut reveals her family lives in a castle under the waters of Loch Ness, suggesting her family may be of nobility.

Lorna was dating a saltwater merman named Finn, who she left back in Rotland, when exchanging to the Boonighted States of Scaremerica. Her parents weren't aware of this relationship due to the freshwater - saltwater conflict, a problem within their relationship, like with Lagoona and Gil. Finn broke up with Lorna possibly due to this conflict between the two monster races. Also, being only 14, she may have been too young for him.

Lorna has the ability of a Loch Ness monster, being the daughter of the Loch Ness Monster:

Lorna is the daughter of the Loch Ness Monster or "Nessie", a cryptid hailing from the Scotish water-body of Loch Ness.  While accounts of the Loch Ness have varied drastically over the years, in modern days it is most commonly depicted as being an ancient aquatic (or semi-aquatic) reptile similar to the prehistoric beast The Plesiosaur. 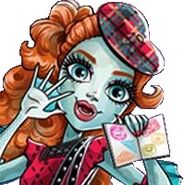 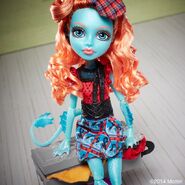 Add a photo to this gallery
Retrieved from "https://monsterhigh.fandom.com/wiki/Lorna_McNessie?oldid=345168"
Community content is available under CC-BY-SA unless otherwise noted.