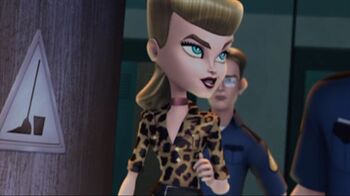 Lilith Van Hellscream is a 2012-introduced and cartoon-only character. She is a human and a student at New Salem High. Lilith is the niece of the famed monster hunter Van Hellscream and attempts to follow in his footsteps. Lilith is a born leader, an intelligent manipulator with a huge ego, and has a propensity for flamboyancy. Her closest friends are two muscular fellow students, who comply with her orders and demands often. Nonetheless, Lilith is not evil. She has a conscience and will listen to it if her actions cause undue consequences to others.

She is voiced in English by Kate Higgins.

Lilith is cunning, sneaky, and somewhat snobbish, making her in similar in personality to Cleo de Nile. However, she is also capable of showing genuine concern when trouble brews. When she found out Holt was going to get the Trick-or Treatment, she had a look of surprise on her face and relented, informing the normies at the party that she thought monsters were evil.

Lilith has dirty blonde hair that is pulled back in an apparent low ponytail. She has teal eyes and has a beauty mark near the upper right corner of her lip. Her attire resembles her uncle's, with a leopard print button-up top, greenish-gold leggings, and black, high-heeled boots that rise right above her knees. Lilith also wears a dark brown belt, a red sash shown to have bullets in the pockets, and a matching choker. At some points, she wears a monocle over her left eye, also reminiscent of her uncle.

The famous and notorious Van Hellscream is Lilith's uncle.

Lilith's closest allies are her goons, who are unwaveringly loyal to her.

Since the events of "Ghouls Rule", Lilith found her monster counterpart in Cleo de Nile, who, like her, struggles to live up to family expectations of leadership, is marginally willing to use others to accomplish her goals, and has a sense for the finest of fashion. The moment they met, they recognized they were kindred spirits despite being the leading figures in their respective groups' growing hostility towards each other. With a bit of pushing by Cleo's friends, Lilith and Cleo managed to use their newfound friendship to establish peace. 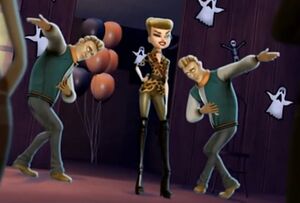 Eventually, the monsters make their way in front of a certain house, where they discuss whether Holt could be responsible for the graffiti and how to get back to the catacombs. Before they can move, the door opens. A boy, Chad, invites them in for the party, thinking they are humans in Halloween costumes. The Monster High students conclude that the police won't be looking for them at the party, so they accept the invitation. Inside, most wish to use the opportunity to still exact revenge, while others decide to just enjoy the party. Frankie meets a human named Clair, who takes a special interest in the new arrivals.

All in all, the monsters handle themselves well at the party until three more guests arrive: the two boys that trashed Monster High and their 'boss', Lilith Van Hellscream. Coming from a family of famed monster hunters, Lilith immediately suspects that some of the guests are monsters and is proven right when Heath's clumsiness reveals them. A fight between monsters and humans is prevented by Chad and Clair, who point out that there is no proof they have to be afraid of monsters. Just then, a siren is heard outside, and everyone rushes out the door to see the police arrest Holt. When Lilith points out that there are more 'evil monsters' present, the rest of the Monster High students run, leaving Holt behind for the time being to be incarcerated for the vandalism to New Salem.

Later at New Salem High, Jackson easily befriends Clair and Chad but has to be creative to avoid loud music and trigger his transformation to Holt. He is successful until the school band starts playing through the speakers, at which point he runs off to an empty corridor of New Salem High to transform away from everyone else. Unfortunately for him, the ever-perceptive Lilith followed him and is witness to his transformation.

Shortly after, New Salem High gets vandalized a second time, and both the humans and monsters think it's Holt again. The humans call for his arrest, while the monsters generally are impressed with and proud of Holt's accomplishments. Hearing her father's and sister's voices in her head still, Cleo lies to her fellow students that Holt sent her an email confirming he is responsible for the attacks on New Salem High and that he will keep in contact until his return with Cleo only because she was the one to inspire him, which makes Cleo a figure of unquestioned authority in the eyes of most of her peers. She does tell her audience that Holt will keep them up to date through his Critter account. Frankie, Deuce, Abbey, and Lagoona don't know what to think of the mess, but they do know they need to stop Holt before things get out of hand even more. With Ghoulia's help, they find out that Holt is somewhere inside New Salem High, and they go out to get him that night. Coincidentally though, right that night, Lilith and her goons are working to vandalize their own school again, this time in costume and with a camera ready to film the action as fake evidence that monsters were behind the vandalism. Lilith immediately spots the four monsters trying to get into New Salem High and gets the police. Frankie and co. find Jackson hidden away in a closet, but the reunion is cut short when Lilith and the police arrive, forcing Jackson to transform into Holt and arrest him. The other four are free to return to Monster High, where they're again put in detention. Worse, during their talk with Bloodgood, the headmistress receives a phone call to turn on the TV. The Sheriff holds an announcement that he will return the true meaning of Halloween by condemning Holt to the Trick-or-Treatment, a death sentence not used in two hundred years. Bloodgood is further informed by the Monster Elder Council that no action will be or may be taken to save Holt.

As much as the news hits everyone, two people are particularly upset. Lilith never meant for an innocent to die because of her schemes, and Cleo realizes she used Holt and that he's going to suffer for it. Neither is willing to take the blame instead, though. At detention, Frankie comes up with the idea to get help from Chad and Clair, looking for evidence that Holt has been framed. Her friends help her escape, and she manages to contact Chad and Clair, eager to get Holt's innocence proven. Their investigation leads to the discovery that Lilith and her goons were behind the vandalism of New Salem High, which solves that mystery but does not answer who left the posts on Holt's Critter page. With Ghoulia's and Spectra's assistance, it is eventually discovered that Cleo is to blame for that part of the lie that may cost Holt's life. The group sets up a confrontation for Cleo and Lilith within the catacombs. Despite everything, the two bond almost instantly over their shared sense of fashion and the equal pressure to live up to their family's expectations. Then Frankie and co. make their presence known and demand that Lilith and Cleo confess what they did to the Sheriff. Lilith and Cleo put up no resistance and explain everything to him, but the Sheriff reveals that he couldn't care less. He needs to show he's a capable lawman, and by keeping Holt the perpetrator and punishing him by execution, he'll accomplish just that. He drives off in his patrol car before Lilith or Cleo can plead with him further to reconsider his decision.

Frankie and co. go to work on a new plan. Just freeing Holt will only have the humans come and get him, so more has to be done. On the one hand, the team decides that they'll free Holt and bait the humans to the Hall of Halloween, where they can learn the true history of humans and monsters. Lilith gets her goons to help in this endeavor. The goons dress up as monsters and pretend to attack Chad, Clair, and Lilith when Holt is put in the Trick-or-Treatment machine, which forces the police away from the device to arrest the monsters. Frankie and Abbey use the diversion to free Holt and then make a run for it, in which they are also assisted by Robecca. As the police figure out they've been duped and give chase to the real monsters, even pursuing Robecca in their cruisers and setting up a roadblock that she easily jumps over, Chad and the goons rouse the human crowd to take matters into their own hands and attack Monster High. Frankie and Holt escape down a manhole and head for the catacombs while Robecca flies off, leaving the Sheriff's men to see where they escaped to and tell the Sheriff, who tells them to head down in pursuit and he'll be right there to join them.

Frankie and Holt reach the Hall of Halloween well in time to prepare for the humans' arrival. When they enter, the monsters greet them as the guests of their party, which confuses the humans greatly. Lilith comes forth to confess she is behind the vandalism that plagued New Salem and that though she meant to protect the humans, she now knows she has nothing to fear from the monsters. The humans accept the confession and invitation, but then the Sheriff and his officers finally arrive, intending to arrest Holt, Frankie, and all monsters present. The New Salem students, however, make a stand against the Sheriff and challenge him to arrest them as well if they want to get to the Monster High students. The Sheriff, wanting to avoid the fallout if he arrests the New Salem students as well, saves face by claiming it's past midnight and that means he is off duty anyway, before sneaking off to the snacks. With all conflict thus ended and subdued, the party commences. Ghouls Rule 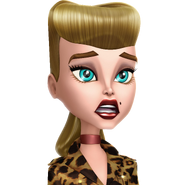 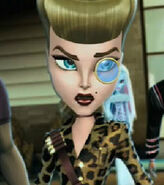