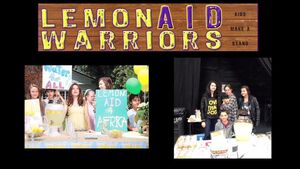 The LemonAID Warriors is the USA's project to mobilize the youth to raise money for various causes. It was started by Lulu Cerone, who had several years of fundraising experience before the earthquake in Haiti on January 12, 2010 inspired her to set up LemonAID Warriors. The project has since been a success nationwide. In 2013, the marketing team of Monster High approached LemonAID Warriors for a partnership after the positive results from the partnership the previous years with the Kind Campaign and WeStopHate.

On April 15, 2013, Monster High posted a video about their partnership with LemonAID Warriors, which also predicted there'd be a monster-fied version of the founder as a Monster High character revealed much like the previous year had been done for WeStopHate. This character, BOO-Lu Cerone, and her profile were published a day later on the 16th of April. Unlike previous years, there is no webisode attached to the partnership with LemonAID Warriors, but the project sponsorship by Monster High was more intense. That is, LemonAID Warriors and Monster High hosted a contest called Ghouls Helping Ghouls, which required participants to host a philantroparty of their own between April 16th and June 9th of 2013. Evidence of this, such as a photo or description of the party, was to be submitted and Monster High subsequently would pick five winners, who'd receive a Monster High gift bag and could choose a charity for Monster High to donate $1,000 too. In order to inspire fans and help them along in this with a few tips, Cerone interviewed the founders of the Kind Campaign and the founder of WeStopHate.

Retrieved from "https://monsterhigh.fandom.com/wiki/LemonAID_Warriors?oldid=315761"
Community content is available under CC-BY-SA unless otherwise noted.