Would it be odd if I said my video game console?

Kjersti Trollsønn is an exchange student, visiting Monster High, in order to broaden her knowledge and be more interactive and active overall. She is also the daughter of a troll couple, from Goreway, her native country. Her video game username is TrollHammer530.

Kjersti considers herself an indoor girl, much smaller, weaker, and fragile than her brothers. However, unlike them, Kjersti has the brains over the brawn and is extremely strategical and analytical due to her passion for gaming, which comes from the fact that she's also a bit of a control freak, and in video games, she's always in control. Nerdy, intelligent, and brave, she speaks in a very smart manner, with not only mostly gaming slang but also complicated vocabulary and mannerisms.

She is definitely one to take a challenge, especially if it involves video games, as she is way more comfortable in the virtual world, both piratically and socially, acquiring various internet friends but few physical ones. Polite and mostly quiet, unless she is enthusiastic about gaming, she is definitely a trustworthy and caring friend, though one should not be surprised if she puts video games over anything else, as exciting as such activity might be to her.

She is also highly skilled with mechanisms and machines, an asset she possesses from an early age.

In contrast to most of her family, Kjersti is very tiny and petite, as she also has light purple-pink skin and hot pink curly hair with dark blue highlights. She has big pointy ears and wears correction glasses. Her dark blue eyes have a pixelated iris, a reference to her love for video games. She wears a black shirt with pixel patterns on the sleeves, a fuchsia skirt with light blue ruffles underneath, pastel light blue socks, and periwinkle shoes.

She speaks with an accent vaguely like Norwegian in a high-pitched, girly, nerdish voice.

Kjersti lives in a big household, with three older, buffer, and stronger brothers, Stomp, Grunt, and Clobber, who are as competitive as one can be, always challenging each other's strength, something their sister can't keep up to. Due to this, their relationship can be a little strained, as Kjersti holds a minor grudge against them for making all things possible to make her go unnoticed. In fact, Kjersti's decision to move to the Boonited States revolves around her relationship with her brothers, wanting to both get away from their constant disputes and to get the credit she deserves for the things she is good at. Despite this, Kjersti is always up to a video game battle with them, an area where she is more comfortable with battling.

Kjersti's parents are also trolls, who work as explorers, and so are her grandparents, who she loves dearly and only doesn't visit more often due to their cave's low internet connection. Kjersti Trollson's Brand-Boo Students diary

Kjersti met Heath Burns online, through the internet and through video games, and the two have been tight ever since, despite Heath's surprise on finding she was a ghoul (girl), which is a sensitive matter to Kjersti. Despite this, she respects his loudmouth personality and recognizes him as a skilled gamer. She considers him one of her best friends during her stay at Monster High.

Kjersti also considers Ghoulia Yelps a friend, though they started of as rivals, when a mysterious gamer beat Kjersti's high score in a Dead Fast videogame, who she learned via Heath that it was Ghoulia. After being accepted into Monster High and starting to attend it, the first thing she did was search for Ghoulia, for a play off. In the end, the two recognized each other as talented gamers and usually bond over video games, and Ghoulia even was assigned to be in charge of her Exchange Program integration. Frankie Stein and the New Ghoul at School 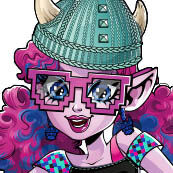