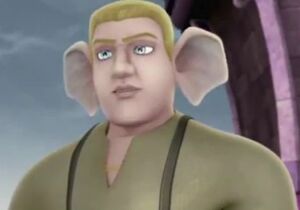 Kipling is a 2012-introduced and cartoon-only character. He is a human with deformed, elephant-like ears, for which he has suffered much of his life. The first person not to reject him upon sight was Bartleby Farnum, which is how Kipling came to be his assistant. Farnum, however, exploited Kipling's fragile sense of self to control him completely, convincing him no one else would ever give him a chance. It wasn't until his midteens that Kipling came into contact with people who helped him see through the abuse and leave Farnum. These days, Kipling is a student at Monster High.

In the English version, Kipling is voiced by Malcolm Danare.

Kipling is the quintessential gentle giant. He is large, strong and with his bag-mask obscuring his face, he is an intimidating apparition, but he is not at all dangerous. Kipling is a meek, soft-voiced fellow who's reluctant to cause harm and convinced that his presence is a bother to others. The only times he could be moved to use violence is when someone with influence over him orders him to or when he sees that nice people are in need of protection.

Kipling is a corpulent human boy with blond hair and blue eyes. His ears are shaped like that of an elephant's, which is why for much of his life he has worn a sack over his head.

Kipling probably parted with his family years ago, if he has ever known them at all. Bartleby was able to convince him no one but him would ever care about a monstrosity like Kipling, to which Kipling had no defense until he met the Monster High students. It also appears he has been working for Bartleby for several years despite ostensibly being underage (since he was invited to enroll at Monster High), and along with the claim that Farnum gave him a home, it is likely he was either intentionally or accidentally abandoned and "adopted" by Bartleby as a cheap assistant.

Even though Bartleby treated Kipling badly, Kipling was deeply loyal to his master. When the kraken threw Bartleby far into the jungle, Kipling ran after him, despite his chance at freedom and Lagoona's plea that he'd stay. It wasn't until he saw his own abuse reflected in the way Bartleby treated those Kipling had grown sympathetic to that he made the choice to break the cycle.

Through his experiences at Skull Shores, Kipling has warmed up to the Monster High students. In particular, he has grown fond of Lagoona Blue and Frankie Stein, who went the extra mile to point out his gentle nature and the injustice that was his abuse at the hands of his master.

Kipling may share a friendship with Andy Beast, in whose treatment by Bartleby he recognized himself, which was a turning point in the way he accepted to be treated.

Kipling isn't romantically involved with anyone, but the end of "Escape From Skull Shores" shows him being checked out by two monster girls who also have elephant-shaped ears.

In "Escape from Skull Shores", A man named Bartleby Farnum is an eccentric show-and salesman with nothing left to show or sell, his frustation over which he takes out on his assistant Kipling, a freak who keeps his head covered by a sack with holes poked into it so that he can see.

On Farnum's orders, Kipling captures Lagoona. Gil runs off, leaving both Lagoona and Farnum certain he's acting on cowardice. As Farnum mocks both Lagoona and Gil, Lagoona tries to convince Kipling to break ties with Farnum, because he isn't anything like his cruel master. Kipling declines, certain he has no one else to rely on.

At a distance, Farnum and Kipling watch the students, who've forgotten about Frankie's necklace, leave. Farnum swears this isn't the end of the matter.

As Andy, Frankie, and Kipling join the students below, Frankie tells Kipling to stay. While freed from Farnum's influence, Kipling isn't sure he'll be accepted until he spots two monster girls who have elephant ears too and clearly thinking he's a looker.

In "Ghouls Rule" and in "13 Wishes", He is seen in the background at monster high but he doesn't do anything note worthy.

Retrieved from "https://monsterhigh.fandom.com/wiki/Kipling?oldid=344574"
Community content is available under CC-BY-SA unless otherwise noted.