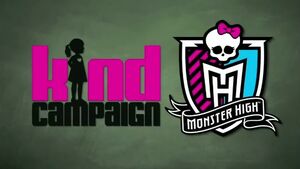 The Kind Campaign is a USAmerican project to end girl-on-girl cruelty that was founded by Molly Thompson and Lauren Parsekian, themselves victims of female bullying. The project was launched in February of 2009 and has since enjoyed success nationwide. In 2010, the Kind Campaign was interviewed on "On Air with Ryan Seacrest". The marketing team of Monster High heard of the project on that occasion and talks of a partnership were soon initiated.

Retrieved from "https://monsterhigh.fandom.com/wiki/Kind_Campaign?oldid=281162"
Community content is available under CC-BY-SA unless otherwise noted.