Kelpie Blue is a sea monster who resides with the rest of the Blue family in the reefs of Great Scarrier Reef, Australia. She is Lagoona Blue's little sister, Ebbie Blue's older sister, and Wade Blue's daughter.

In the English version, Kelpie Blue is voiced by Larissa Gallagher.

Kelpie is very shy and quiet, but has big determination and whit too, idolizing her family and her friends, longing to be like them, with their bravery, which she lacks. This admiration also streches to Lagoona's talent for dancing, as Kelpie is a fan of dancing as well, and a talented one too. Despite her gentleness, in some more exciting moments, she'll get visibly ectastic and will leave her shyness behind.

Kelpie is of small stature, due to her young age. Slender and petite, she has a big head that is filled with flowing curled blonde dreadlocks, that fade into dark blue in the tips. She's definetly more monstrous looking than her sister, with emerald green eyes above her button nose, which hold her enormous purple glasses with horns in the end. In fact, horns seem to be a big part of her complexion, as she has a row of small pink horns in her forehead, between her thick pink fin-like eyebrows, that point out from her face, and she has similar pink horns in her shoulders and lower limbs. Her skin is mostly violet, however she has turquoise smudges all around her body, most prominent framing her face, in her lower jaw that also holds noticible scales, and her arms, where two big blue fins sprout, around her sholder area. The same fin design is used for her violet ears. She also wears braces.

Kelpie is the daughter of two sea monsters.

Additionally she has an extended line of siblings, with the eldest, Lagoona, her younger triplets, Dewey, Squirt and Tadpole, and the youngest, Ebbie. 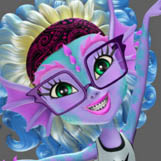 Add a photo to this gallery
Retrieved from "https://monsterhigh.fandom.com/wiki/Kelpie_Blue?oldid=344732"
Community content is available under CC-BY-SA unless otherwise noted.