Do Peri and Pearl count? Just kidding! I don't have time for pets.

In English, she is voiced by Lyndsy Kail.

Kala is loud, bold and in control, and when she isn’t, you can bet she'll strive to be. Being the control freak she is, and knows she is, she can’t stand if other monsters either try to outshine her or disobey her, to the point of extreme jealousy and rage. This is because she has the need to feel secure and in charge. Modesty doesn't hit too hard on this girl either, as she is confident to a fault, that leads her into the paths of conceitedness and vanity. However, she becomes more shy once Lagoona learns of Kala’s troubled past.

Her bossiness can be a little annoying to other monsters, but she couldn't care less, just as long as she is the boss. She's also a tad mean spirited, which is a trait that derives from her need for lead, as she constantly makes snarky comments about people she doesn't even know and will laugh at other's dismay, because she believes that, if she puts people down, she'll always be up. She'll comment on anything, again, to let people know that she's in charge. And to top it off, she also has a jealous streak.

To sum it up, Kala is a tough girl to handle. However, when she lets herself open to others, especially those who are close to her, she is kind and understanding and even fun company, despite her competitive and controlling traits always being present. Additionally, there is one thing that always rubs her the wrong way: judgments based on stereotypes and rumors, as she believes that, if something is going to be criticized (which she knows she is no saint about) it should at least be fair.

She's a prized dancer too, and devotes her life to dancing, but, obviously, she has to be the one choreographing the movements and she needs to be the main dancer, in center stage. Dancing makes her feel free and wonderful and its a feeling she doesn't intend to share.

Kala has one of the most complex designs of the many Monster High characters. Being a kraken, it means her body will be half of a woman and half of an octopus, or a squid in her case. Her long tail starts just where her bust ends, being deep purple in color, with a pattern across it consisting of curves and circles, in a pink to yellow gradient. At the end of her tail, that resembles a squid mantle with two neon pink fins at each side, sprout four bright yellow squid arms covered in suckers and two neon pink tentacles.

With a thicker complexion, her skin is a deep magenta color, with the exception of the area around the eyes, where there is another variation of lighter pink pattern. She has two sets of humanoid arms, with a noticeable exoskeleton and suckers in her fingers. Her hair is a short ponytail and naturally curly, in a bright orange color with deep blue highlights, and, along with her big shiny lips, she has large sucker-like ears and studs in her shoulders and chest. Her four elbows resemble crab legs. As a child, the parts of her arms from her elbows to her fingers were a lighter shade of pink.

Kala is the daughter of who is known around the Grand Scarrier Reef only as the Kraken. For the longest time, she got along with her father just fine, as her father was sweet and would teach her several things. However, as she grew into her teenage age and had more contact with the outside world, she discovered that her father was not as loved by the public as by her: he was feared due to his secludedness and due to his gigantic and monstrous appearance. People assumed he was murderous and mocked Kala, not directly, but indirectly, as she was constantly hearing the comments about her dad and of how hideous he is. This, together with the fact that due to this fear, the Kraken rarely left his cave for the citizen's sake, not supporting Kala entirely, in simple ways that made a difference, like attending her dance performances, fractured Kala's relationship with the Kraken, and in turn made her envious of Lagoona’s life (“You don’t know what it’s like to be made fun of!”), which Lagoona didn’t understand, resulting in her bullying Lagoona, and causing Lagoona to abandon dancing out of fear and embarrassment. Kala has still held a grudge years later. She started to be both disappointed and ashamed of him, and started to occult the ties between the two to the people she knew, and even if the two still loved each other deeply, there was always some friction between the two. Luckily, they've solved this and are now a happy family, since the truth about the Kraken is now open to the world.

It is unknown if she has a mother, although in Lagoona’s flashback, she referred to her family as “they”, meaning she likely lives with monsters other than her father.

Kala doesn't have a lot of friends, she's good on her own. However, she considers the Serpentine sisters, Peri and Pearl to be her best friends, though the status is questionable. The three came together due to dancing, and the two sisters serve as Kala's backup dancers, with Kala obviously in the lead. They also hang out a lot outside practices. However, their relationship is strange: while Peri doesn't seem to like Kala enough to consider her a best friend, she is forced into interactions due to Pearl's weird fascination to Kala, who takes advantage of this to boss them around. Despite this, even if it is true that Kala doesn't give neither of them their worth and will usually treat them as pets or laugh at their problems and constant banter, she still likes them for who they are and really enjoys their company. She's also glad that, while arguing with each other they aren't arguing with her, which is a good thing.

Within the other monsters and creatures of the reef, who she usually tends to despise, since she "is" so much better than any of them, she has her eyes on Posea Reef, the daughter of Poseidon, who she acts nice around, even if in her back she just considers her a lowly plant lover know-it-all. This is due to Posea's status as being friends with the daughter of a god is interesting to Kala and "could be beneficial". Kala Mer'ri's Great Scarrier Reef - Down Under Ghouls diary

Lagoona Blue and her also have history. They were best friends and dancing partners, back when they were younger and when Lagoona still lived in Australia (Mosstralia). However, at the age of 12, Kala started to distance herself from Lagoona, when jealousy of her happy family that always attended her shows and showed constant support, in contrast to Kala's broken one, started to make its way to Kala's head, making her sad, angry, and hurt. It is hinted that within that time she bullied her out of envy and hate, and that, until present time she feels this way. She cut all of Lagoona's faces from her photos and thought she'd never see her again. That is, until her return to the reef from an exchange program at Monster High. They start getting along again once Kala explains herself and Lagoona apologizes for teasing Kala about the Kraken.

Kala herself is one of the creatures in the reef who's represented by a plant in Posea's magical garden. Her plant is considered one of Posea's gloomy-plants. It's described as a "plant with lots of purples and golds and reds -vibrant, bold colors.", "healthy, and often dances merrily in the waves", "strong" and "aggressive", yet deep down "kinda sad" and "yearning", making a general, and accurate, description of Kala. It is set apart from the rest of the garden, representing Kala's outcast nature from society. Despite their rather strained relationship, most of Posea's attention is given to Kala's plant, as it seems to be the most troubled, and in need of care. It resembles a squid-shaped cactus. Once Kala and Lagoona rekindle their friendship, both of their flowers are more happy and healthy than ever before. 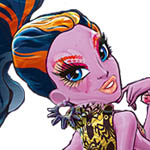 Add a photo to this gallery
Retrieved from "https://monsterhigh.fandom.com/wiki/Kala_Mer%27ri?oldid=349597"
Community content is available under CC-BY-SA unless otherwise noted.