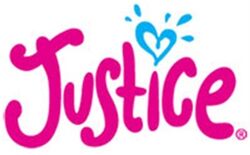 Justice, launched in 2004, is the female variant of the two tween-oriented stores operated by Tween Brands, which was founded in 1987 and rebranded as the current name in 2006. Justice sells apparel, underwear, sleepwear, swimwear, lifestyle, accessories, and personal care products aimed at girls of ages 7 to 14.

Justice had been selling exclusive Monster High merchandise since the franchise's launch, although they stopped selling them in 2016.

Retrieved from "https://monsterhigh.fandom.com/wiki/Justice?oldid=329452"
Community content is available under CC-BY-SA unless otherwise noted.