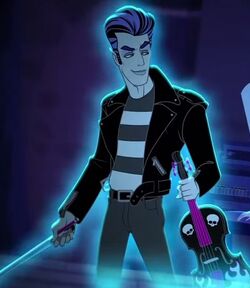 Johnny Spirit is a 2013-introduced and cartoon-only character. He is a ghost and a student at Monster High. Johnny is the quintessential 'bad boy', being both feared and admired while caring about none of that. One of the few things in unlife he does care about is music, as he is a gifted violin player. Due to this, Operetta is the only one he holds some respect for, as she shares his love of music and is not in the least impressed by his reputation.

In English, he is voiced by Evan Smith.

Johnny has a terrible reputation around the school, to the point where students run in terror at the sight of him and his most recent detention lasted 3000 years. He is not one to care though; he is rather nonchalant and content to just do his own thing and ignore others. He prefers the catacombs over the surface portion of campus, where he can play the fiddle in peace.

Just like Operetta having a style that is retro-inspired, Johnny's fashion sense is inspired by either 1950's or 1960s style, sporting attire that appears to be either greaser or biker. He wears a 1960's styled quiff from hair, and has pale grey skin, while his hair is a mixture of dark blue and light blue. He has what appear to be teal-aqua eyes, and his eyelids are a lightly darkened grey, appearing as if it were some kind of shadow such as eyeshadow. Johnny wears a black leather jacket over a white-and-dark-grey t-shirt, with dark grey pants with a belt, his jacket has a pull strap-like design parting at the left side, and he wears black, leather-up boots. He typically has grey lips and his eyebrows match the color of his hair.

Johnny is not an easy person to befriend, as Toralei found out when she tried to get a conversation going from one baddie to another. Rather than accepting her, Johnny told her he wasn't signing her poster, thereby denying equalness and deeply insulting Toralei. Had it been up to Johnny, he'd remained a loner with a reputation to stay away from. Fate decided otherwise, because during his years of detention another student, Operetta, had taken up residence in his spot in the catacombs. A more violent confrontation was avoided when Johnny took note that she loves music too and thus a music competition would do: his fiddle against her organ. It didn't take long for the challenge to turn into a mutually enjoyed jam session that formed the basis of a friendship and later romance. Playing the Boos

According to Haunted, Johnny and Operetta have already officially started going out. Their love is perhaps a thing that started from their shared love of music.

Retrieved from "https://monsterhigh.fandom.com/wiki/Johnny_Spirit?oldid=345857"
Community content is available under CC-BY-SA unless otherwise noted.