I am a friend to any animal in need.

Jane Boolittle is a 2013-introduced and all-around character. She is a jungle monster and a student at Monster High. Jane is adopted, having been found in the sole company of her pet Needles in the jungles of Australia at a young age by Dr. Boolittle. Since he and his research team were to stay for an extended period of time, Jane got to grow up near the place she was found, although she has yet to discover what she is and where she's from. Her recent enrollment at Monster High, located in the USA, hasn't made her search any easier, but the new environment properly motivates her social skills, which had failed to develop properly in the isolated research station. Jane is extremely shy and functions better in the company of animals, with which she can talk, than in the company of peers. It is because of this that, while she fled her fellow students upon arrival at Monster High, she easily befriended their pets. They have since been helping her break out of her shell, with some success but a long road is ahead still.

She is voiced by Stephanie Sheh in English.

Jane was born and orphaned somewhere in the jungle (presumably Australia, due to her accent), where she was discovered at five or six years of age by Dr. Boolittle and Dr. Moreau. Dr. Boolittle adopted her, but since the scientists had come to the jungle for long-term research, Dr. Boolittle kept living in the general vicinity of her old home. Due to living with a limited amount of people around her for so many years, Jane has spent little time socializing with other people and thus feels very scared and apprehensive about speaking to groups. She loves animals dearly, and thanks of her ability to speak their language, she prefers the company of animals to people. Nonetheless, she's willing to try and socialize more when Headless Headmistress Bloodgood offers to enroll her into Monster High.

Jane, having had no contact with humans or monsters for most of her childhood, does not know how old she exactly is. Her guess for the moment is 15 to 16. Even after some six years of living with her and studying the environment, the scientists of the research station still have no idea as to her monster identity. The only clue available is her staff, which she's always had with her, and her pet Needles, who's also always been with her but refuses to reveal anything.

She seems to have a doctor's bag and a huge staff, which may indicate she could be a witch doctor. Hence her last name, Boolittle, which is a pun on Dr. Doolittle. She has purple skin and marks around her eyes. She has light blue eyes and big voluminous hair that is a shade of deep black with blue-purple accents and red highlights. She also has big claws, nodding to her jungle monster heritage.

Jane lived on her own in the jungle for much of her childhood, until she was found by two mad scientists, Dr Boolittle, who adopted her as his daughter, and Dr Moreau. The two raised her, and she helps them out with their research.

Each of Jane's adoptive parents are Monster High counterparts to famous fictional doctors. Dr. Moreau is a mad-scientist from the 1896 horror novel The Island of Doctor Moreau by H.G. Wells and it's adaptations. In the story, Dr. Moreau is a reclusive doctor obsessed with vivisection who owns his own jungle island in the Southern Pacific Ocean where he has lived ever since getting chased out of London for his experiments. On the island, Moreau creates many species of "Beast-Folk" by augmenting animals to become humanoid.

Doctor Boolittle is a tongue-and-cheek reference to the non-horror character of Doctor Dolittle. Dolittle being a veterinarian with the ability to speak to animals. 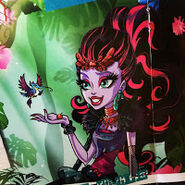 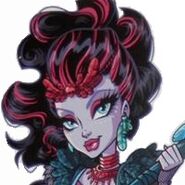 Add a photo to this gallery
Retrieved from "https://monsterhigh.fandom.com/wiki/Jane_Boolittle?oldid=349072"
Community content is available under CC-BY-SA unless otherwise noted.