Crossfade, a chameleon. He can blend into any situation and never call attention to himself.

Jackson Jekyll is a 2010-introduced and all-around character. He is part human and part fire elemental, as his father is one. Due to his mother's Jekyll/Hyde lineage, he has a monstrous alter ego named of Holt Hyde. Jackson longed to be a monster until he discovered his alter-ego whom he now wars with. Believing himself to be fully human most of his life, he has grown up among monsters in a world where the two groups mutually dislike each other, causing him to be cautious and shy but not easily intimidated. As well as careful and kind, Jackson is a dedicated scientist and one of the best students at Monster High.

Like his alter-ego, Holt, Jackson is voiced by Cindy Robinson in the English version of the cartoon and Dan Kizler in the Hebrew version.

Jackson's alter ego is Holt Hyde, known as D.J. Hyde in the Monster High books. His transformation is triggered by heat and sweat in the books and by music in the movies and webisodes.

Jackson is a friendly guy who enjoys playing casketball, though he has a geeky fashion sense and is sometimes picked on by other students. He appears to be the only human student at Monster High, making him confused by his apparent normalcy in a school full of monsters.

In the diaries he once asked Draculaura to bite him,[1] as he was afraid they couldn't really be friends when school started. Draculaura was able to talk him out of it, but she could tell he was still depressed.

In the Monster High book series, he is not afraid or uncomfortable about being around monsters and is able to interact with them quite easily. Draculaura noted in her diary that he was unfazed when he met her father, who normally creeps out both human and monsters.[2]

In the cartoon, he seems much more wary around monsters, most likely due to being bullied at school for being a "normie." He even went as far as to say that he "didn't belong." and that no one would want him at Cleo's party in the webisode "Hyde and Shriek."

While the Monster High students are unaware of Jackson's/Holt's dual nature, older monsters can sense his duality. This is evident in Draculaura's "Basic" diary when she overhears a conversation between her father and Jackson, where Jackson makes a light joke about stakes. Her father later cryptically tells her that Jackson is more than he appears.[3]

In the web series, Jackson has black hair with blond ends, blue eyes and a pierced left eyebrow. He has a yin and yang symbol between his shoulders. Because of his shy personality, his body language is nervous and he tends to hunch his shoulders.

In the book series Monster High by Lisi Harrison, Jackson has a mop of brown hair and crackling hazel eyes.

He usually wears black framed glasses which are also thick-framed and thick-rimmed in both web series and books.

Throughout each storyline, Holt and Jackson have no control over their transformations and change from one into the other under specific circumstances. In the cartoon series, it seems to be music that causes Holt/Jackson's transformation. This is first seen in "Hyde and Shriek." In the books it is heat that triggers the transformation.

In Holt Hyde's Basic diary, Holt's transformation into Jackson Jekyll normally occurs at sunrise and lasts until sunset. Holt noted that when he was trying to see what the town was like during the day, he blacked out at the moment of sunrise. However, in Jackson Jekyll's 'Between Classes' diary, it's revealed that the trigger for Jackson's transformation has since changed, so that it is now music as in the cartoon. Specifically, "music with a 4/4 time signature played in excess of 90 decibels" triggers the transformation into Holt. However according to the dairy, because of Jackson's "elemental heritage + Hyde transformation + teenage boy" status, it is likely to change again at least once more before he hits adulthood.

In the Monster High book series, the change is caused by sweat.

There are times when Jackson's and Holt's memories and abilities leak over to the other. For example, in the diaries Jackson is able to keep up with Deuce Gorgon in a basketball game (to the gorgon's surprise),[4] while Holt recognizes Draculaura at a club despite the fact it's the "first" time he meets her.[5]

In the Monster High books, his mother is named Sydney Jekyll. The exact way Jackson's family tree looks is fuzzy at the moment. In Jackson Jekyll's 'Between Classes' diary, it is revealed that it's Jackson's mother from whom the dual nature comes, while his father is revealed to be a fire elemental and implied to be the parent through which Jackson is the cousin to Heath Burns, a fact first mentioned in "Fear Pressure". However, Ghoul Spirit states that Jackson's mother is the sister of Heath's father, making the exact familial relations unclear. In his profile bio on the website, he states his parents are "Dr. and Mrs. Jekyll", meaning that Dr. Jekyll is his father in the bio series. In the Monster High books, Dr. Jekyll is his mother, but she is referred to as Ms. J, and Jackson is the grandson of the original Dr. Henry-Jekyll-Mr.-Edward-Hyde character.

Until he was 16 years of age, Jackson did not know he had a monster half in the form of Holt. He did know both his parents were monsters, but he thought he'd only been given his mother's human side. Neither his parents apparently thought their son's dual nature was something they needed to inform him about.

Especially Jackson's mother is very protective of her little boy, and seeing him get hurt is something that can trigger her transformation into the mode most suited for helping him out. Also according to Holt Hyde's Basic diary, Jackson's mother doesn't keep the same job for long and the family regularly moves to a place closer to her new job.

In the Monster High books, Jackson regards Holt as his brother, as the latter reveals to Melody Carver: "Because D.J. likes her. I can't do that to him...or me, or whoever....He's kind of like my brother, I guess." Heath Burns is not related to Jackson in the books, and therefore neither is Harmony Burns. Though they are cousins in the webisodes.

Jackson has an uncle who owns a farm. It is not stated what side of the family his uncle is on, although it's slightly more likely he is a Jekyll/Hyde because he has no problem only seeing Jackson out. Facebook

Jackson's pet is Crossfade the chameleon (like Holt Hyde), only in green form.

Draculaura writes in her Basic diary about her crush on Jackson, and her interest seems to be reciprocated. However, in her School Out's diary she writes that the two of them "split up" because Jackson never showed up for any of their dates in the evenings (as by that time he would have changed into Holt Hyde), and could never remember why the next day.

Starting in the webisode "Miss Infearmation", he and Frankie Stein have displayed big feelings for each other. Since then his feelings for her have grown and he seemed disappointed when Frankie tells him they can't go out yet until he works things out with Holt Hyde. However, they are still close friends and he doesn't seem to mind waiting for her.

In the novels he is dating Melody Carver, but in the first novel Cleo kissed him to get back at Melody for bumping into her, causing her to spill her grapes, which (along with the fact of Melody not knowing about D.J. Hyde) caused some tension between the two of them.

In "Ghouls Rule", Jackson begins scouting out the normie school, and there meets Clair. The two become fast friends, and by the end of the film, maybe even some thing more, with Clair kissing him at the Halloween Party.

He has no monster abilities, being a normie, as humans don't have any abilities that monsters have, but he does have a special ability:

Holt and Jackson are inspired by Dr. Jekyll and Mr. Hyde from the Robert Louis Stevenson novel "The Strange Case of Dr. Jekyll and Mr. Hyde".  In the story, Dr. Henry Jekyll was a scientist who created a formula that in theory could eradicate all the darkness from someone's mind but as a side-effect the formula split Jekyll's personality in two and created the persona of Mr. Edward Hyde.  Mr. Hyde embodied all of Jekyll's wild and dark traits leading him to become a wanted fugitive, causing trouble for both personalities. 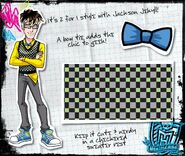 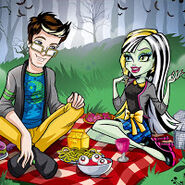 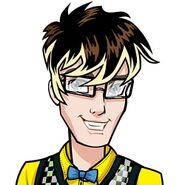 Retrieved from "https://monsterhigh.fandom.com/wiki/Jackson_Jekyll?oldid=345771"
Community content is available under CC-BY-SA unless otherwise noted.