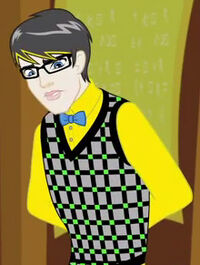 Jackson Jekyll debuted in the cartoon series in the Volume 2 webisode "Fear Pressure", which premiered on May 26, 2011. He is voiced by Cindy Robinson in the English version of the cartoon.

It's Jackson's first day at Monster High and though he's largely met with hostility by the student body for being a human, Deuce and Heath invite him to their table during lunch. Fear Pressure

Jackson meets Frankie, a young, beautiful girl who wants to make him feel comfortable at his new school, Monster High, and have good times with her. She invites him to a party of Cleo's at her house. Miss Infearmation

He gets nervous when wanting to go to Cleo's party and confront Frankie. Jackson turns into Holt Hyde, his monster alter-ego and Holt gets the party started. With this, Jackson is no longer nervous, especially since he won't remember it. Hyde and Shriek

Frankie confronts Jackson at school, and and tells him she missed him at Cleo's party. Jackson tells her he had to change. Back-to-Ghoul Jackson invites Frankie to the movies. Hyde Your Heart

Frankie runs into him and confronts him. Jackson tells Frankie he knows she moved on (his alter-ego) without Frankie knowing what she's talking about. Frankie screams that she was just starting to like him and Jackson runs off. Ghostly Gossip

He meets Frankie near her locker at school. He says hello to her. The Bermuda Love Triangle

Jackson says "Yay!" into the air when Bloodgood says about normie society. He is at the dance to help the werewolves of Crescent Moon High and vampires of Belfry Prep get along. At that party, he transforms into Holt Hyde and Holt deejays the party. He later blurts out "Yay!" when Frankie says: "Or even part normie." Fright On!

"This is so interesting." Frankie & Jackson at the movies with popcorn.

"Oh. Not again." Jackson's reflection at the water of a sidewalk. 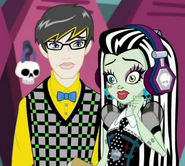 "My fist plus your face equals epic win!"

Jackson and Holt looking on their iCoffins.

Jackson's reaction to the kiss in "Ghouls Rule"

Jackson, trying to be cool

Add a photo to this gallery
Retrieved from "https://monsterhigh.fandom.com/wiki/Jackson_Jekyll/cartoon?oldid=348853"
Community content is available under CC-BY-SA unless otherwise noted.