Iris Clops debuted in the cartoon series in the Volume 1 webisode "Talon Show", which premiered on May 5, 2010. She is voiced by Kate Higgins in the English version of the cartoon ("Fear the Book") and by Paula Rhodes in other appearances.

Iris attends Monster High's 1361st Annual Charity Talon Show, where she is a spectator to a great performance by Cleo and an even greater by Clawdeen. Talon Show

Iris's Trigular Calcometry 101 class is hosted by a substitute teacher, Lou Zarr, who does not get along with the class. A conflict with Deuce leaves him petrified, upon which Iris and the other students consider the class dismissed. Substitute Creature

There is a school production of Hamlet running, which Iris attends. Clawditions

An eyeball fight breaks out during Biteology and Iris participates. Freedom Fight Iris possibly won the previous year's Scream Queen election. She votes for Clawdeen as the new Scream Queen following a text campaign promising a school carnival if she wins. Rumor Run Wild When Cleo de Nile overuses her mind-control idol, Iris is one of her victims. Idol Threat

Iris takes care of an egg for a whole week as an assignment for Mr. Hackington's class. Hatch Me If You Can

As a former backgrounder, Iris also does nothing in particular in the webisodes "Blue Lagoona", "Copy Canine", "The Hot Boy", "Photo Finish", "Bad Zituation", "Horrorscope", and "Date of the Dead".

When Frankie tries to recruit new members for the Fear Squad, Iris makes sure to run away fast. Why We Fright Iris attends a swim match, a debate, and a casketball game. Fear-A-Mid Power Iris attends the Spirit Rally. Varsity Boos Iris is one of the people approached for a FrightTube view by the Fear Squad. Falling Spirits

Iris is among the onlookers rooting for the Fear Squad to get their one million hits on FrightTube. Fatal Error

As many students do, Iris goes to spend her Spring Break at Gloom Beach. Screech to the Beach

Iris relaxes at the beach. Don't Cheer the Reaper By day, Iris relaxes some more at the beach and by night, she roots for her friends at the Gloom Beach competition. Road to Monster Mashionals

A crowd of students, among whom Iris, welcomes the Fear Squad back from Gloom Beach. Queen of the Scammed Friday the 13th claims many victims and Iris runs to not be one of them. Frightday the 13th

She waits in line for Cleo to sign her copy of the fearbook. Fear the Book

As a former backgrounder, Iris also does nothing in particular in the webisodes "Gloomsday" and "HooDoo You Like?".

Iris is Manny's date to the movie premiere of the latest Vampire Majesty entry. Welcome to Hauntlywood

TBA I Only Have Eye for You (webisode) So You Think You Can Date Inner Monster 2.0

Iris at the beach. 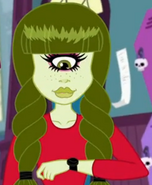 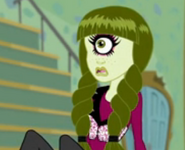 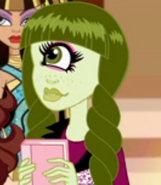 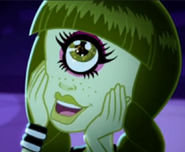 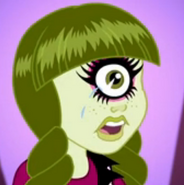 Iris on the 'good cause' poster.

Add a photo to this gallery
Retrieved from "https://monsterhigh.fandom.com/wiki/Iris_Clops/cartoon?oldid=349069"
Community content is available under CC-BY-SA unless otherwise noted.