I really want an alien pet of some kind - preferably something multi-eyed and fuzzy, not multi-tentacled and oozy.

She is voiced by Kate Higgins in "Fear the Book" and by Paula Rhodes in other appearances in English.

Iris is a girl of science. She's incredibly devoted and interested in the matters of knowledge, and has a fascination for the astral. She knows a lot about the stars, in specific, and is proud of such. Most of her thoughts are made rationally and she usually looks at the greater picture. However, this rationality isn't always present in her life, especially in how she deals with her relationships.

She can get needy easily, but will not stand up for this, until reached an extreme, due to her sweetness and willingness to keep quiet. She can be considered rather shy, and sometimes needs a shove with interactions, but what she really needs the most is advice, as she doesn't seem completely aware of her rights as an individual and can act as a bit of a push-over. Despite her logic, she fails to find solutions to this matters that bother her. Luckily, she's a social girl so her friends are always out to help her with this.

Then there's the fact that her one eye condition takes away her visual perception, which means she doesn't completely have hold of herself most of the times. In other words, she's very clumsy and around her disaster is bound to happen. Luckily for her, she is just as talented as she is disastrous so she can easily find a way to fix things, through her logic, of course. These talents include science, astronomy, dancing, as she is a former Fear Squad member, and apparently leading, since she was once Scream Queen.

Iris's preferred outfit colors are rich maroon and green, with hints of black and white to finish it up. Befitting her heritage, she uses eye-based decoration in her clothes and accessories, and having an air of ladyhood, she appreciates simple but refined fashion on herself. She has an olive-green eye in the centre of her face, and Iris has two green pigtails or ponytails twisted at the sides of her head. These twin-tails are olive-green.

Iris has the abilities of a cyclops:

Nothing is known about them, but at least one of them is a cyclops, or both of them are cyclopes. Since Iris shares her last name with Simon Clops, they might be related. There is also a Cy Clops in the Ghoulfriends series, but since he is from a different continuity than Iris, he may not be related.

Iris is friends with Scarah Screams, shown in most webisodes, but most prominently in "Kind: The Shockumentary", as they forgive each other after arguing earlier. The two were together during the time under Cleo's Fear Squad and have since then become close friends, it seems.

She is also friends with Gigi Grant, the two sharing a love for astronomy. In fact, the two spend quite the time together discussing the matter and they even explore the skies together in Iris's dad observatory, which is handy to both. In her profile bio, she says one of her BFFs is Manny Taur.

Iris dated the pink cyclops boy in "Fright On!", but he was shortly after seen with someone else, implying it wasn't too serious.

Manny Taur's and Iris's families are long-time friends, as fellow giants of Greek mythology. However, the two are currently dating. Their relationship is nothing short of bumpy. Manny is your classical bully so he can be violent and just overall rude and oblivious to Iris's needs for attention in their relationship, usually putting her in second place to anything, while Iris lets him act this way without a peep. Iris gets pretty lonely and needy because of this, but is determined to find the good in Manny, despite her friend's attempts to get the two to break up, as they seem to simply not be cut out for each other. However, it seems that the two have built the reputation of constantly breaking up and getting back together. However, only Iris knows how Manny is truly like and why he acts the way he does. The only thing keeping the two together is their mutual flaws: their clumsiness. And it is this clumsiness, mixed with a constant attempt to impress Iris, that makes Manny so grumpy when everything fails. Manny also shows a softer side around her, and has been shown to have deep feelings for her, so the two are bound together no matter what the outside words are. 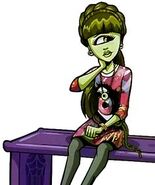 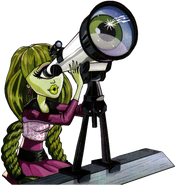 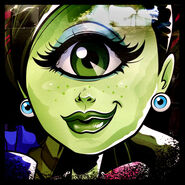 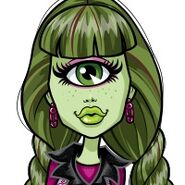 Add a photo to this gallery
Retrieved from "https://monsterhigh.fandom.com/wiki/Iris_Clops?oldid=344756"
Community content is available under CC-BY-SA unless otherwise noted.