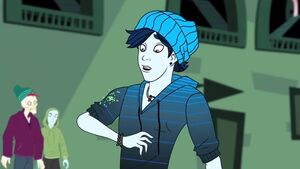 Invisi Billy debuted in the cartoon series in the Volume 3 webisode "Unearthed Day", which premiered on April 20, 2012. He is voiced by Evan Smith in the English version of the cartoon.

When Mr. Where holds an audition for a lead dancer in the screamatorium, Invisi Billy helps out keeping the place presentable. But when he takes note of Rochelle's distress over not being good enough, he puts his job aside to help her out. While Rochelle dances, he assists her invisibly to make her movement more graceful and light. It gains Rochelle the role of lead dancer. Fright Dance Invisi Billy hangs out in the creepateria. I Scream, You Scream Scarah and Invisi Billy talk at her locker. Invasion of the Ghoul Snatchers Invisi Billy is impressed by Sloman Mortavitch's debate skills. Flowers for Slow Moe Scarah-Voyant

In need of Scarah Screams's mind-reading powers, the shadows capture Invisi Billy and threaten to hurt him if Scarah doesn't cooperate. Invisi Billy begs her to help him, so Scarah complies. 13 Wishes

As a member of the Disappearing Club, Invisi Billy gladly teaches Catty Noir how to disappear so she can avoid her overzealous fans. In Plain Fright

Add a photo to this gallery
Retrieved from "https://monsterhigh.fandom.com/wiki/Invisi_Billy/cartoon?oldid=342656"
Community content is available under CC-BY-SA unless otherwise noted.