I had a dog once, but I had to give him away because every time I took him out for a walk, animal control would try and pick him up as a stray.

Invisi Billy is a 2012-introduced and all-around character. He is an invisible boy and a student at Monster High. Outside of classes, Invisi Billy can regularly be found in the vampitheater to help Mr. Where with the next production. Like his father, Invisi Billy loves creating and has a knack for special effects, even if all it sometimes is is him walking around invisible while holding an item. He also loves to use his power for the occasional prank, especially if he can make someone feel better with it. He dates Scarah Screams, who can always detect his presence by checking the minds around her. Invisi Billy takes on the role of chairman of the Disappearing Club after school, which is a small but supportive group of friends who appreciate the art of disappearing.

Invisi Billy is voiced in English by Evan Smith.

Invisi Billy is a nice guy who minds his own business and is definitely caring and willing to help whoever needs help through his invisibility powers. He is full of wit and smart and definitely knows how to apply his abilities in strategy. He does this a lot to live his passion, special effects. He adores working backstage to theaters and musicals, which comes in handy since he is a quiet soul, and with his invisibility, he can create the most fantastic effects.

However, he is also a guy who loves his mischief, using his powers for pranking regularly. He's a total prankster, and his brains help, and when he can make someone feel better with his jokes, he's a happy camper. Despite this, he isn't abusive of his powers, knows the limits of good and bad, and usually only sticks to good and mischief. He refuses to use his powers in ways people aren't comfortable with and respects people's privacies, even if he struggles to keep visible most of the time.

He loves life and enjoys living it freely, but never at the expense of others. He still enjoys his jokes and being silly but wouldn't do anything that would affect someone greatly. He is sometimes called by his nickname Billy.

Billy has an icy blue skin tone bordering on white, grey eyes, and his hair is a dark shade of blue when he is visible. This gives him a bad-boy-type look. When he is invisible, he is completely transparent, with little sign of him being there.

Invisi Billy is the son of the Invisible Man. If the "New Ghoul Materializes Just in Time for Día de Los Muertos" article is to be believed, he has siblings.

Invisi Billy used to have a pet dog, but he had to give him away because he couldn't walk him without animal control thinking the dog was a stray. Since then, Invisi Billy has acquired a box, which may or may not contain a cat which on his box is called "a quantum cat".

Invisi Billy is popular with the ladies, who've started calling him "Drop Dead Dreamy"! This is because when he is not in invisible form, his true appearance is obviously seen, which most female monsters find his appearance attractive. His own dream-girl is Scarah Screams, whom he hooked up with in "Scarah-Voyant". They are again announced as a couple according to "13 Wishes" and his 'New Scaremester' diary.

Billy is the son of the Invisible Man, a monster first appearing in the HG Wells novel of the same name and later as a classic movie monster. The Invisible Man was once an albino scientist named Jack Griffin who discovered a scientific serum capable of augmenting the human body to be unaffected by light, rendering the user invisible. Griffin used the serum on himself and became invisible but then used bandages and heavy clothing to disguise himself as visible as a means of covertly creating a perfected formula and cure. However, the serum affected Griffin's brain and left him deteriorating into insanity, eventually going on a rampage after nosy neighbors broke into his apartment and disturbed his work. 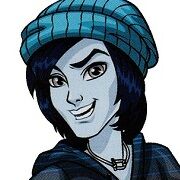