Howleen Wolf is a 2011-introduced and all-around character. She is a werewolf who currently attends Monster High and who comes from a family with many children—among which Clawdia, Clawd, and Clawdeen. She is the youngest of the siblings in high school and a first degree troublemaker. Her siblings all have already found their strengths and made plans for their careers, while Howleen can barely even decide on her fashions and hair color for the week. Because of this, she can get jealous and careless when she thinks she's on the track of figuring herself out. She greatly looks up to Clawdeen, with whom she shares a room, but cannot stand it when she acts on her Big Sister responsibilities. Other than Clawdeen, Twyla is Howleen's closest companion, even if their personalities are completely opposite.

She is voiced by America Young in the English version of the cartoon and by Lara Jill Miller in some webisodes.

If there ever was a girl struggling with Middle Child Syndrome, it's Howleen. She's bratty and self-centered, but those negative attributes come from a deep wish to live up to standards set by her older siblings and to do so in her own way. The popularity and known talents of her immediate elders, Clawd and Clawdeen, makes Howleen self-conscious and eager to crawl out of their shadows with something unique to her. Howleen Wolf's 13 Wishes diary A little impulsive and a whole lot of inexperienced, it is not rare for her to bring about trouble she can't get out of on her own in her pursuit of a name. Among others, she's been a leading force in a vampire-werewolf conflict that threatened to undo Monster High, Fright On! came into possession of a genie and became power hungry before falling under the influence of her shadow self, 13 Wishes and caused Romulus quite a bit of harm when she got it into her head he was not the man for her. Fierce Crush

Despite this headstrong determination to be relevant, which isn't solely negative since it does bring out the assertiveness in her, she is welcoming to others regardless of their rank in the social hierarchy. Twyla's_13_Wishes_diary And although she doesn't understand that her friends don't care about popularity, she doesn't force them to walk her path. 13 Wishes Coupled with her siblings' groups of friends, this gives Howleen a solid network to investigate and explore her talents. The one she's shown the strongest aptness to is poetry, but she's also a fresh talent on the soccer field with Toralei Stripe, daring with fashion, and she has an interest in music. Howleen Wolf's 'Campus Stroll' diary

Howleen has tan skin, which is much lighter than any of her known siblings. She has yellow eyes and tight curly hair that she sometimes straightens. Her left ear is flop down and her right ear is straight up. Howleen Wolf's 'Campus Stroll' diary Howleen's hair is one of her main means to express herself and she loves to style and dye it differently every so often in search of haircuts that suit her. Her biological hair color is therefore unknown, although she is likely a brunette. Howleen's fashion sense is similarly dictated by experimentation. Having grown up with a fair share of hand-me-downs, Howleen's learned to make clothes her own by the way she mixes, matches, and restructures. Although she generally doesn't admit it, she admires Clawdeen's taste in fashion and regularly steals pieces and accessories from her for her own ensembles, much to Clawdeen's annoyance. Fright On!

Howleen is the daughter of Clawrk Wolf and Harriet Wolf, who are the proud owners of a bed & breakfast. Where There's a Wolf, There's a Way While Howleen always comes from a large family, the exact makeup of her older siblings differs between sources. Her other brothers are given as Howlminton, who either is younger or older than a set of triplets. Howleen herself is the youngest of these three, the older two being Howldon and Howie. Finally, the youngest sibling is Clawnor. Where There's a Wolf, There's a Way On the other hand, Howleen has an undetermined amount of siblings and Clawd is merely the oldest one still living at home. There are several older brothers, A Kick-Off To Howl For some of whom attend college and three of whom have their own families already. Howleen Wolf's 'Campus Stroll' diary There's also at least one sister, Clawdia Wolf, who goes to college in Londoom. As far as the immediate household goes, there is a brother younger than Clawdeen Rumor Run Wild with the total number of Howleen's male siblings being around ten. Why Do Ghouls Fall in Love?

As far as the extended family is concerned, one of the Wolfs' grandmothers, if she's still alive, lives on a farm somewhere. Friday Night Frights A woman with children of her own is part of the Wolf family, but whether she is extended family or another sibling is unknown. Jackson Jekyll's 'Between Classes' diary A possible if unlikely relative is an elderly werewolf with bright blue eyes and almost completely white fur who is the great-grandfather of several Monster High alumni and students. This might refer to the Wolf siblings, who are the only ones known to fit that description, but the differing fenotypes cast doubt. Batsy Claro's Brand-Boo Students diary

As a fresh face at Monster High, Howleen has not much of an own crowd gathered around her. Most monsters she is friends with are primarily friends of Clawdeen or Clawd and though this does not negate the quality of her interaction with them, they do belong to a different circle. The only one of Howleen's friends who is primarily hers is Twyla, who therefore also is her best friend. Twyla is a shy individual who likes to make herself invisible in the shadows. One day, Howleen noticed her sitting alone when her werewolf nose picked up on her scent. Howleen invited herself to the table and convinced her not to flee, resulting in a strong bond between the two. Twyla provides Howleen with confidence and advice, while Howleen makes sure that Twyla does not miss out on socializing.

Of the friends Howleen shares with her older siblings, Draculaura, Romulus, Abbey Bominable, and Operetta stand out. Draculaura is a well-known face around the Wolf household and both a trusted acquaintance of Howleen as well as a fellow poet. Howleen Wolf's 13 Wishes diary Romulus is Clawd's best friend, but since the merging of Crescent Moon High and Monster High and the following conflict with the vampires of Belfry Prep, Fright On! he has taken the role of mentor to Howleen; hanging out with her, helping her, and looking out for her. Fierce Crush Abbey became a friend of Howleen's after she protected her from Manny Taur's bullying. Abbey Bominable's 'School's Out' diary And Howleen's friendship with Operetta started when she heard the latter make music in a store at the Maul and wanted to learn to play too. Operetta refused to give Howleen lessons on the spot, but did give her the advice to get started and the promise that if her interest in music remained, Operetta would educate her further. Operetta's 'Campus Stroll' diary

Being young and in search of herself still, romance has only an awkward place in her life. She does have opinions on what constitutes as cute in boys, a taste she shares with Twyla, Twyla's 13 Wishes diary but she's only acted on it once when she developed a crush on Romulus. He, however, didn't take notice. As irony would have it, Howleen herself is oblivious to the romantic feelings Lothar harbors for her. (And he, in turn, doesn't know of slug girl's pining for him.) Fierce Crush

During Draculaura's Sweet 1600 birthday party, Howleen was shot with one of C.A. Cupid's arrows by Toralei and temporarily fell in love with Eyera. It wasn't mutual and she literally dropped him the moment the effect wore off. Why Do Ghouls Fall in Love?

Howleen's normie name is Leena and wasn't mentioned until the third book where she was a trouble maker and sent to boot camp. 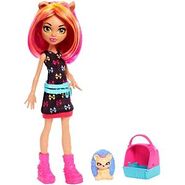 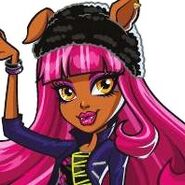 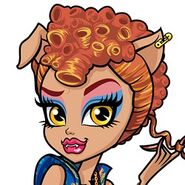 Add a photo to this gallery
Retrieved from "https://monsterhigh.fandom.com/wiki/Howleen_Wolf?oldid=345710"
Community content is available under CC-BY-SA unless otherwise noted.