Hoodude Voodoo debuted in the cartoon series in the Volume 2 webisode "HooDoo You Like?", which premiered on May 19, 2011. He is voiced by Cam Clarke in the English version of the cartoon.

Made by Frankie as an emergency boyfriend because she told her friends she had one, Hoodude enjoys his time with her but does not reveal he is alive until Frankie puts him with the trash. Heartbroken, he runs off crying. HooDoo You Like? Ghostly Gossip

TBA Why Do Ghouls Fall in Love? Escape From Skull Shores Scaris: City of Frights

When Draculaura returns to Transylvania with Lord Stoker, Hoodude stows away in the ghouls' luggage, only revealing himself sometime after they arrive at Castle Dracul. After explaining how he got there, they allow him to come with them on their journey to find Elissabat. When they arrive in Londoom to look for a clue from Elissabat in the Tower of Londoom, Hoodude makes the mistake of taking the Crown Jewels to check for the clue, alerting the zombie Yeoman Warders guarding the Crown Jewels of their theft. After the Wolf siblings' big sister, Clawdia, returns the jewels to the guards, thereby showing the guards no harm done since the Crown Jewels were returned safely, Hoodude continues onward with the ghouls as they travel to New Goreleans, meeting Honey Swamp, and then on to Hauntlywood. Once there, Hoodude manages to get a job as a custodian on the studio lot before rejoining everyone to discover Elissabat is the famous boovie actress, Veronica Von Vamp. He joins everyone for Elissabat's latest movie in the Vampire Majesty series and her coronation as the rightful Vampire Queen. Frights, Camera, Action! 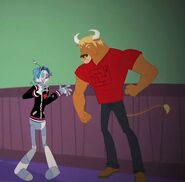 Add a photo to this gallery
Retrieved from "https://monsterhigh.fandom.com/wiki/HooDude_VooDoo/cartoon?oldid=342393"
Community content is available under CC-BY-SA unless otherwise noted.